With the action set in a gorgeous Japanese garden, we see the cherry blossoms in the trees nearby. Stairs lead up to a Japanese temple, though much of that view is blocked by the set of 5 reels (3-4-4-3- symbols). I think that it’s one of the more elegant and beautifully crafted slots I’ve seen in the Japanese category.

The initial few symbols are the ones showing us four types of coins, the type with a square in the middle. They’re offered in four colors, made out of jade, copper, silver, and gold. Next, we see images of the Jizo and Koi Statues, along with character symbols of Yoshida, Tomoe, and Sensei. Stacked Sakura Wilds are going to be available as well.

Thanks to a reputation that they’ve built over the last decade or so, Quickspin is a developer that I’m always willing to give a chance when they announce a new slot machine. Looking at Sakura Fortune 2, I would do this even without that reputation, since it’s such a good-looking design. That’s true for most of their content though, as Quickspin is the kind of company that rivals NetEnt and Yggdrasil when it comes to design quality. 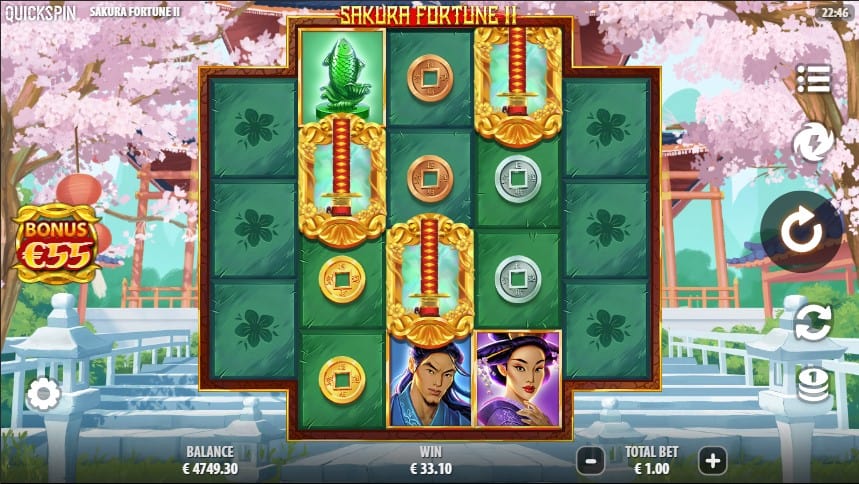 There are about 16 different bet values listed on a separate screen, which you can open up before you trigger its spins. The lowest value listed there is $0.20, while the highest one requires $100 per spin.

It’s not a standard 5-reel system, since you get 3-4-4-4-3 symbols, but it all looks good anyway. The game area provides the player with 576 ways to win, meaning that every single combination is covered, provided that the matching symbols landed left to right, on 3+ reels.

A big feature symbol, the Sakura Wild fits that description in more ways than one. It’s a powerful feature, but it is also a stacked wild that could end up taking over entire reels (only reels 2-4 can get these wilds). Sometimes, nudges will push them as needed, so they end up occupying the full reel, if they hadn’t already.

After a Sakura Wild lands on all positions of a reel, it triggers a re-spin, during which it is sticky. Additional wilds that do the same thing will extend the feature, adding 1 re-spin each time. At most, you can get 3 re-spins, with the three sticky wild reels being there to help make it very profitable.

One more major feature symbol is included, and it’s a Sword scatter. You initially get these on reels 2-4, same as the wilds, and you need all three in order to trigger a re-spin feature that only includes the reels 1 and 5. You are trying to get Sword scatters on those other reels as well, to improve the upcoming feature.

Depending on the number of Swords that you have at the end, you can get 9, 10, or 11 free spins, along with 0, 1, or 2 Locked Wilds, respectively. Besides any initial wilds, you can get more, and new ones will also become sticky on the entire reel. Each new wild also gives you 1 extra spin. If you can get to three wild reels that are sticky, then a 3x multiplier will apply to all wins from that point forward.

Like many of the Quickspin slots I’ve seen so far, the payouts are excellent in Sakura Fortune 2. Wins of up to 22,482x the stake are on the table, from a slot machine that’s considered highly volatile. The RTP varies, but the best variant is the one with the 96.03% returns.

Sakura Fortune 2 does look like an excellent sequel, and the start of a series that will be enjoyed by many Quickspin players. The features are powerful, and you see it in the rewards that the game can deliver if you’re really lucky.