In the Hall of the Mountain King is a piece of orchestral music composed by Edvard Grieg in the late 19th century. This classical piece has served as an inspiration to artists and developers of Quickspin to make the slot machine that takes you deep inside the mountain where the king of trolls lives.

The slot is set in the vast lands of the north with characters appearing on the reels looking like those we have seen in Avatar, the movie by Steven Spielberg. Don’t let the peaceful atmosphere of the game fool you as this title brings lot of excitement once the Troll King tries to lure you into his hall.

Established in 2011 in Sweden, Quickspin is a slot specialist declaring that they create the world’s most awesome slots. Their products feature distinctive, crisp visuals and original sounds while innovative bonus features will keep you glued to the screen of your desktop or mobile device.

In 2016, Quickspin was acquired by Playtech, one of the industry giants. At the same time they have introduced a set of promotional tools with achievements players can accomplish for a more rewarding gaming experience. Big Bad Wolf is their award-winning slot inspired by a fairytale like some other titles in their portfolio. 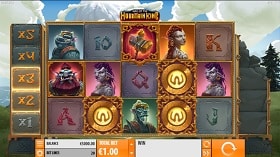 Hall of the Mountain King is played at 5 reels and 20 paylines. To spin the reels, you have to wager at least $0.20 per round. If you would like to risk more, the game supports bets going up to $100 per spin. The slot uses the same interface as other Quickspin titles. It comes equipped with the Autoplay feature allowing you to activate up to 1,000 spins that will play without interruption. You are allowed to set the win and loss limit if you wish so.

This is a typical Quickspin affair with nicely designed graphics, smooth animations and crystal clear sounds. The slot is home to high-paying symbols depicted as the Troll King and four troll characters.

The rest of positions are populated by playing card royals looking like they are carved in stone, which matches the theme of the game. What makes this game stand out from the crowd is a musical score inspired by the famous classical piece.

Once you load the game, you will notice the Multiplier Meter on the left-hand side of the reels. In awards multipliers that depend on the number of Wilds appearing on the reels for each particular spin. A multiplier can be 1x, 2x, 3x, 4x or 5x, but if Wilds appear in stacks, they can be bigger.

Look out for King Hammer Scatter appearing on the three central reels only. Once you manage to land 3 of these on the reels at the same time, you will trigger the free spins feature consisting of three stages. Each stage of the feature offers a unique feature.

In the stage 1, you will benefit from the Symbol Upgrade feature with the Troll King breaking one of the blocks in the Upgrade Meter on the right-hand side of the reels. The corresponding low-value icon will be removed from all the instances on the reels and replaced by the respective high-value symbol. If he breaks the bottom multiplier block, multipliers can increase to 15x.

This is a high volatility slot from the Quickspin creative kitchen. It boasts a 96.29% RTP and a maximum possible win standing at over 7,000x your bet in a single spin.

The most lucrative symbols are Wild and the Troll King himself awarding 40x the bet each. In addition, Wild can boost your payouts awarding increasing multipliers.

Quickspin has created a highly exciting slot machine that offers you multiple opportunities to win. While at first it may strike you as light-hearted with mountains in the backdrop, one you start playing it, Hall of the Mountain King will provide you with a thrilling gaming experience thanks to loads of bonus features it offers.

The biggest wins are hidden within free spins with low-value symbols removed, extra Wilds added to the reels and multipliers going all the way up to 15x.

Wild Tome of the Woods