While we wouldn’t call the original Reel Rush a classic, it certainly had a loyal following. It’s not at the same level as Dead or Alive or Gonzo’s Quest. But it certainly seems to be substantial enough for NetEnt to decide to follow up with a sequel! So if you’re ready to dive back into the world of retro graphics and thrilling prizes? A Reel Rush awaits you!

And while our puns are horrible, these graphics are pretty good. The blocky aesthetic helps this slot stand out compared to its rivals. But we’d be quite pleased with the visuals even without that. The animations are buttery smooth! Not to mention the pretty background image that decorates this game. Just past the train tracks that bring you useful power-ups is a large chasm that tickles the imagination.

In terms of available special features, there are eight random bonuses that can trigger at any time! Winning combinations also cause re-spins, during which the playing field increases in size. There’s also a free spins special feature with two modes, which rely on Super Tokens to activate.

While many software providers tried their luck at online gambling, few had the success of NetEnt. With a focus on polished, beautiful games, the developer has won the hearts and minds of many players.

Even twenty years later, nobody has been able to challenge the top dog of the slots industry. NetEnt quite recently added some more accolades to their belt! They won Best Online Casino Provider, Best Live Casino Provider and Best Support for Responsible Gaming at the SEG awards. Here’s to twenty more years of excellent experiences! 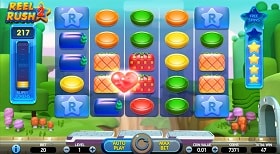 Reel Rush 2 is played on a 5×5 board, with 45 ways to win to begin with. You don’t get access to the full board immediately. Instead, several parts are blocked off! As you score consecutive wins, these blocks disappear, until the entirety of the playing field is revealed. At that point, gamblers have 3125 ways to win that they can use.

It’s the same old NetEnt layout we’re used to. Only now, it’s a bit more colourful, which makes it fit better with the rest of the slot! You still make a bet by pressing the large Spin button in the middle. To set your total stake, adjust your bet level and coin value until you find a wager that suits you.

Autoplay is clearly labelled with bright yellow letters, making it impossible to miss. Players can set the number of spins, as well as win and loss limits. You can even tell the game to stop spinning if a single win exceeds a certain value, or if you win free spins.

Graphics wise, it’s the animations that have won us over. The rest of Reel Rush 2 doesn’t look bad, but it’s an otherwise standard fruit slot. Seeing all the extra bonuses appear to do their part never gets old. Nor does the satisfaction of watching the board open up after each consecutive win, meaning you have better odds of winning!

There are eight bonuses appear at random. You’ll know if they’re active or not, since you can see their icons on the small train beneath the reels. Their effects are as follows:

Each time you win, the reels re-spin. Some blocked off parts disappear from the board, increasing your chances of winning again!

As you clear the reels from excess blocks, your free spins meter on the right increases. When it’s completely full, you win regular free spins. If the Super Token Meter on the left has a value of at least 2000, you unlock Super Free Spins.

You can unlock Super Free Spins early by either buying the tokens or gambling the ones you have on a lucky wheel. Alternatively, you can just start your regular free spins and keep saving up to unlock it.

During Super Free Spins, a progressive multiplier is active. The multiplier applies to all wins during super free spins, and increases each time a win occurs.

While it may seem a bit complex from the outside, it’s not that bad. You’ll quickly get the hang of things, and you’ll be enjoying all the added bonuses in no time! We really like this slot. It added to the base formula, made it more fun, and kept the thrill of winning big. It’s got our vote of confidence!

The Phantom of the Opera