Finding a game which has a theme that’s based on Ancient Egypt, that’s not exactly difficult in the slot machine industry. Still, Relax Gaming made an effort and designed a cartoon-style game where the main character has his head larger than the body, unique enough that it makes the game interesting. There is also a view from the top of the archaeological dig, with the reels placed in the middle.

The Explorer is going to be your scatter, but there are also Mummies serving as wilds, as well as mystery symbols with drawings of scarabs on them. Going beyond the feature symbols, we discover the Ramses symbol, along with three deities (Horus, Sobek and Anubis), and lastly four symbols with representations of birds, lotus, Eye of Ra and the Ankh.

The company behind Ramses Revenge is called Relax Gaming. It’s a major developer, with over 50 slot machines available, as well as various other partnerships signed with different companies, allowing them to publish their games. Slots like Mega Flip, Marching Legions or Hellcatraz are part of the more popular titles they have in their collection. 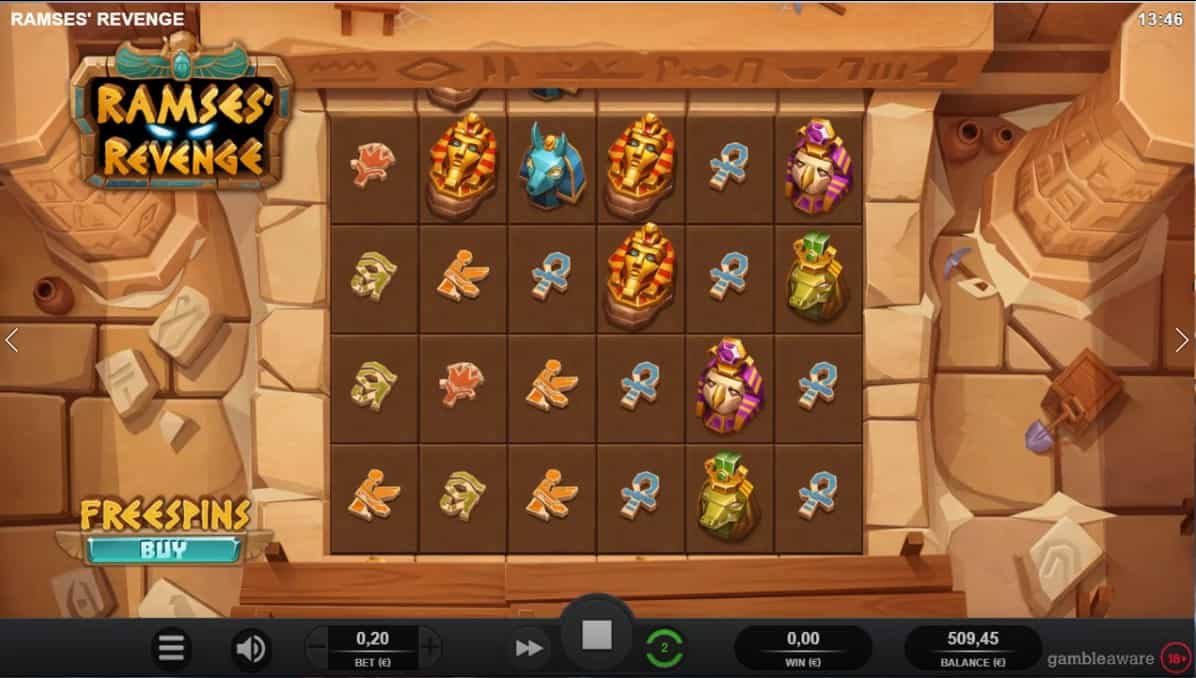 In exchange for the wager, the game delivers 4096 ways to win each round, from a setup with 6×4 reels. You get a win when you have at least 3 symbols in a combo, which requires them to land from the left to the right, on consecutive reels.

Now, if we’re looking at the major features that are delivered in Ramses Revenge, there are both regular and random ones that could come.

Among the latter, we find the Mystery Sandstorm, which will come in waves over the reels. 2 to 6 waves of the storm will come, each one leaving 1 to 4 mystery symbols behind. At the end, these mystery symbols are all transformed into a single type of regular symbol.

Mummy Wilds are in play, and they can be used as substitutes for all other types of symbols.

As for the free spins, you receive 6 of them, provided that 2 or more Explorers show up in view.

Once the free spins start, the Explorers which triggered the feature will be replaced with Mummy Wilds. They keep their current position, until a new Explorer symbol lands on the reels, at which point a Mummy will move to its position and will gain a 1x for its multiplier, while adding 1 extra free round. If there are more Explorers than there are Mummies, then additional Mummies will appear.

You can end up with multiple multiplier wilds on the reels, and best of all they’re sticky and can be useful several times.

Ramses Revenge is one of the best-paying titles available right now, with potential top jackpots of up to 49,996x the stake. There aren’t a lot of games that will allow for rewards that high to be paid, but you can rest assured that it’s not going to make it easy for anyone to get that much.

So far, that kind of jackpot is only theoretically possible, in a slot with High volatility, but also with a fair 96.15% RTP.

Ramses Revenge certainly has a big enough top jackpot, that it’s going to stand out even in the incredibly crowded Egyptian category. A good slot machine, with some interesting features and excellent graphics, it’s one that I’d recommend you pay attention to.