With cartoon-style graphics that border on the humorous, Pushy Cats appears to get its inspiration from some kind of TV game show. We see the studio where this is taking place in the background, with an audience of cats being barely visible next to the reels, looking in. There is quite a bit of gold in the slot’s design, but it’s a modern look overall.

Coming in different colors, but quite basic-looking otherwise, the four lowest-paying symbols from Pushy Cats will be the ones showing off the J to A Royals. We then see images with two fish, one cooked fish, ham, and a cat’s bell. Paw Print symbols and Cat Wilds will be shown on the reels as well.

Yggdrasil has managed to climb to the top of the online gaming industry, and a huge chunk of their collection is made up of slot machines. It’s one of the many Swedish developers that have shown great talent when it comes to design, though the features they offer are also very good usually. 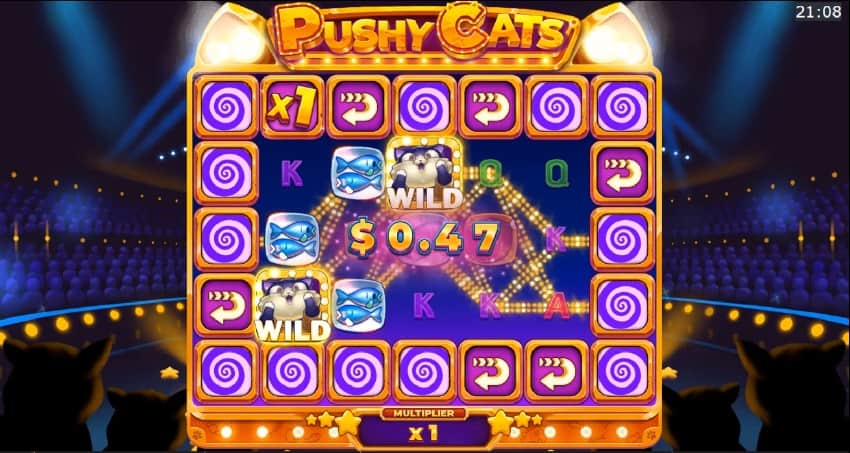 Open up the Bet menu, and you will discover there a list of values that you can choose from. Their range is between $0.20 and $100.

To get paid in Pushy Cats, you will need anywhere between 3 and 5 matching symbols to line up on an active line, left to right. You will find 20 paylines on its 5 reels.

The wild symbol will only be used on the middle three reels. It’s acting as a substitute symbol from there, but that’s just the start. It will also become locked in its current position, triggering a re-spin. If additional wilds appear, the re-spins continue.

There will be a bonus game as well, which will require having 3 wilds on the reels at the same time, or collecting Paw Print symbols when they show up (you need 10 of these).

During the bonus spins, a multiplier is present and it gets a 1x boost after every winning round. Regular wilds turn into Walking Wilds for this feature, and they move in a random direction each round.

Another thing that’s special about this feature, is that there is a line of bumpers which now surround the reels. Their number and type depends on the level of the bonus game, but you start off at a random level.

As wilds move, they can go over one of the winning bumpers. This takes them back to the starting position, and then gives you the Bumper in question. Once the Bumper is activated, it is turned into a Vortex, which will remove wilds when they land on them. When all wilds are removed, the free spins stop.

Other Bumpers that you can get include the Multiplier (up to 5x), Cash (up to 50x the stake), U-Turn (pushes the Wild back to the reels), Extra Wild (1-2 extra wilds added), or Bonus Bumpers (additional winning bumpers).

I think that you’re going to love the slot machine for its winning potential in particular, since Pushy Cats is able to pay up to 20,000x the stake. That’s the result of just one extremely lucky spin, which isn’t very likely to come, particularly in a High volatility game.

The RTP is set to 96%, which is about average, and a decent number overall.

Pushy Cats comes with very good graphics, and it includes more than enough unique features, to make it an interesting slot machine. Add that big top prize, and most players will want to give it a chance.