The characters of Nitropolis 3 remain the same as in the rest of the series. We’re once again seeing crews of pets as they survive in a post-apocalyptic landscape, where they remain masters of the cities. These gangs of dogs and cats are the main symbols, and they’re split into gangs like Rogue Rats, Gritty Kitty, Dirty Dawgs, or Pug Thugs. The difference is that in this case the action takes us on a beach, so it’s got a bit of a tropical vibe to it. The presence of barrels with toxic substances manages to ruin its appeal though.

This slot machine is available thanks to ELK Studios. It’s been over a decade since this company was established, and they have managed to create an impressive collection of slots so far. It’s not as much about the size of the collection, as it is about the average quality of their games. There is only one downside I see with their latest games though, and that’s the switch to a RTP of 95%, from the 96% we used to see in their older titles. 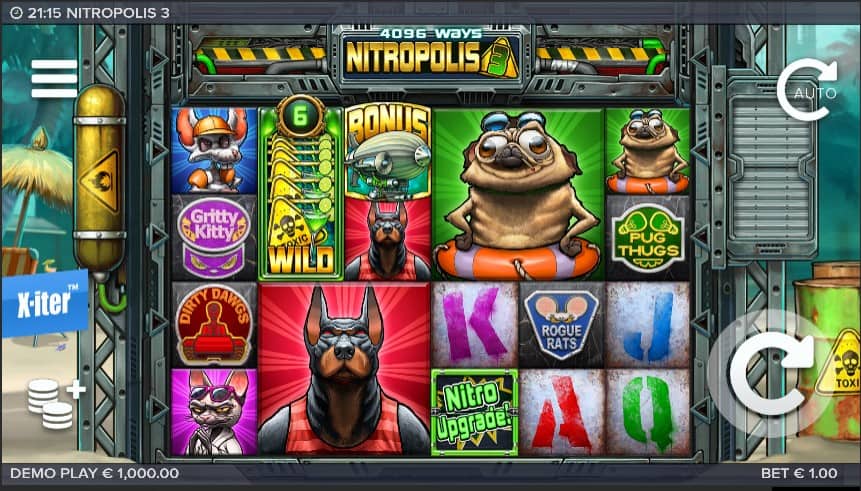 They changed their betting options a bit for this game, allowing you to spend up to $50 per spin (previous slots went up to $100). The starting point for that betting range is at $0.20.

Starting off, you’re seeing a generic setup with 6×4 reels and 4096 ways to win. It gets a lot more impressive than that though, thanks to the use of Nitro Reels. There are a lot more ways to win that could become available, plus the reels expand to as much as 6×8 reels, and add to the chances to form combinations.

After you’ve formed your first wins, you will notice that they don’t stay put on the reels. It’s the start of an Avalanche, which will remove those symbols from the reels, and will add others. At the same time, the reels expand by one row after each Avalanche. At most, you can get 6×8 reels, which will reset back to 6×4 after the spin ends.

The Nitro Reels are also noteworthy, as they land double-stacked, and they count as 4 to 12 symbols of the same type. Automatically, that reel becomes much larger, and the ways to win get a tremendous boost.

They added Big Nitro Reels to this game. They take over 2×3 positions, and they give you multiple 2×2 symbols there, up to 6 in total.

The slot uses wilds as well, and these can show up and act as substitutes in several sizes, ranging from regular ones, to those as large as 4×4 positions.

It doesn’t stop there. The game can also bring several modifier symbols, which will change the game in various ways. They can remove all regular symbols, they can make it that combinations form both ways, give you Nitro reels of the same type on several reels, or upgrade them to have more symbols in them. There are even Nitro Wilds that can pop up.

Finally, I’d mention the scatter symbols, which will lead you to a feature with 8 to 20 free spins. A major plus for them, is the presence of sticky Nitro Reels. Another is that the game area remains in its larger form, if it expands.

A player that likes high volatility content will likely love the kind of payouts that Nitropolis 3 can deliver. 50,000x the stake is the promise, and that’s one of the highest jackpots that you can claim in a modern slot right now. The downside is only the 95% RTP.

Nitropolis 3 continues a popular series from ELK Studios, adding even more powerful features and bigger rewards. It takes things to the next level, and it’s a pretty good option overall. The 95% RTP is the only one that hurts, especially since the volatility is also high.