Mega Rise might be impressive feature wise, but the theme in use is the classic one. It revolves around fruits and various other icons that have been around for about a century now. What I did appreciate, was the quality of the design, in line with other games launched these days, not with slots from the 90s.

On the game’s list of symbols, you get the Mega Rise Chips, Lucky 7s, Gold Bells, Silver Stars, Melons, Grapes, Lemons and Cherries.

Red Tiger Gaming, a developer that has impressed us over the last couple of years, has just been acquired by NetEnt, so we only expect things to improve going forward. Their slot machines are always flawless graphics wise, modern and with plenty of details included in their designs.

They might not always have the best top payouts, but feature wise they tend to do things differently than most, relying more on random features. Overall, one of the developers to watch out for. 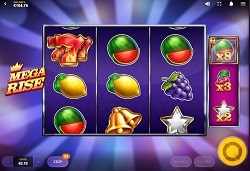 In most Red Tiger slots, you just need to select the total bet, and it will cover whatever setup the game offers. This is what happens here as well, where you choose a bet between $0.20 and $40.

It’s a game with 3×3 reels, so it’s considered a classic, and it offers a total of 5 active lines. Not that different from any of the older games you might’ve played. Pick the wager, spin the reels, and that’s it.

Even though it takes the form of a classic slot machine, the features involved are definitely not typical of any such old game. You don’t get any of the usual feature symbols, so both scatters and wilds are missing.

As for the features that are included, one of them is the Rising Multiplier bar, shown on the right side of the game area. All you have to do is create a win, which will boost the multiplier for that particular symbol, by 1x. This can happen for three symbols at a time, which you will find on the multiplier bar.

If a new symbol forms a combo, one other than the three shown in the bar, then one of the multipliers shown to you will drop from the bar. The new symbol takes its place. The fewer types of winning combinations you form, the better you’re off with this system.

In addition to the system we’ve described, there is the Mega Rise Chip as well. You can get them to appear in either regular or golden versions.

Mega Rise Chips can do one of two things, either it locks a random symbol on the bar until you get a win from it, or it boosts one of the symbols shown there up to 3x.

Golden Mega Rise Chips can be used to either boost multipliers up to 7x, or to lock a random symbol with two locks, until you get a win with it.

There are excellent rewards that you could get via Mega Rise, as the slot will pay as much as 6375x total stake in a single round. It’s way above what many other Red Tiger slots have been offering, so it’s a welcomed change in their collection.

Mega Rise is a slot with High volatility, where the RTP is set to 96.08%. Check with the casino though, there is an alternative version with a 94.15% RTP.

Mega Rise is a game that’s different, that’s for sure. It might have classic inspired graphics, but its features are unique and fun, while payouts can be quite high. Fans of high volatility slots now have a classic 3-reel title to play with.