Tarzan’s story is something that a lot of us grew up with, and it’s one that I expect many will have fond memories with. Turned into a slot machine, it’s going to take us in the middle of a dark jungle, shown in the background. Getting back to the game area, we observe a mix of characters, creatures of the jungle, but also gemstones, telling us that the usual hunt for treasures is in full swing here as well. We don’t actually see anyone called Tarzan inside, it’s Jungle Man that gets the main role, so it doesn’t appear to be a licensed title, despite the strong vibes we’re getting from it.

Lord of the Wilds is Jungle Man himself, so we see him used as the substitute, but there is a regular version of him as well. Golden Elephants are your scatters and free spins triggers. We then get images of Jungle Lady, Black Panther, Gorillas, Toucans, and the four card suit icons, made out of gemstones (gold, green, blue and purple).

Red Tiger is currently a NetEnt subsidiary, after its acquisition back in 2019. The developer has more than 180 games released for the online market, and its titles are known for their excellent graphics, and often enough for fun features as well. 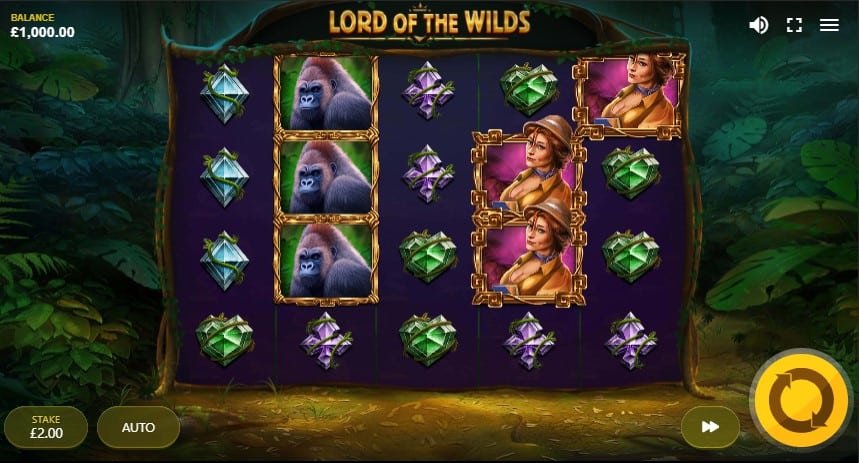 Giving the player a total of 30 lines, Lord of the Wilds will require a wager of $0.20 to $40, each spin. You’re going to pick the total amount directly.

5×4 reels is a fairly large game area to be playing with, so the 30 lines that are added might not prove satisfying for everyone. The standard 3 to 5 symbols will form combinations, provided that they match and go from left to right on the same line.

Jungle Man is typically showing up on the reels and acting as a regular symbol, paying up to 180 coins on each line that it fully covers.

However, there is a Wild Jungle Man version as well, which will be added to the game area through random events. This version pays up to 300 coins per line, plus it’s also a substitute.

Wild Kiss is the first of the features which can give us Wild Jungle Man, and it requires the appearance of the Jungle Lady at random, to transform all regular Jungle Man icons. It also makes them sticky, to be used as wilds for the next spin.

The other one is Jungle Treasure. It’s also random, and it has Jungle Man swinging across the game area, giving you regular Jungle Man icons in various locations, for a chance at huge wins.

Other than that, we have the Elephant scatters, and the free spins that they can trigger. You can receive 10 to 20 free spins this way, during which all wilds are sticky.

In a slot which is going to have high volatility, we expected bigger rewards to be possible, and Lord of the Wilds doesn’t quite get there. The jackpot of this slot appears to go up to 2,100x at most. RTP is set to 95.66%, which is another area where I would’ve liked to see something better.

Lord of the Wilds offers the player an enjoyable theme and design, but I am not a big fan of its random modifiers and the short list of features that it offers. Add the low top payout as well, and it feels like it doesn’t have enough meat on those bones, for us to sink our teeth into.

Lord of the Wilds Slot Machine For Real Money Now:

Clash of the Beasts