Maya U Max does feature inspiration from the Mayan civilization, but its South American connection doesn’t go further than the choice of symbols. Otherwise, the game area occupies the entire space available on the screen. If you really want a Mayan story, there are slots that focus more on that sort of design, this one keeps things simple and mostly has appropriate decorations.

The symbols have the Royals, 9 to A, decorated with Mayan graphics. The next symbols will show us five premium gemstones, along with the Idol scatter, and the Wild logo. The Maya logo is the one allowing for the reel expansion to occur.

It’s coming from two different companies actually, since it’s a collaboration that Microgaming has with Gong Gaming Technologies. The two are partnered up, so I expect to see a lot more games coming from them in the next few years. Other examples include slots like Skulls Heap and Pirate’s Quest. 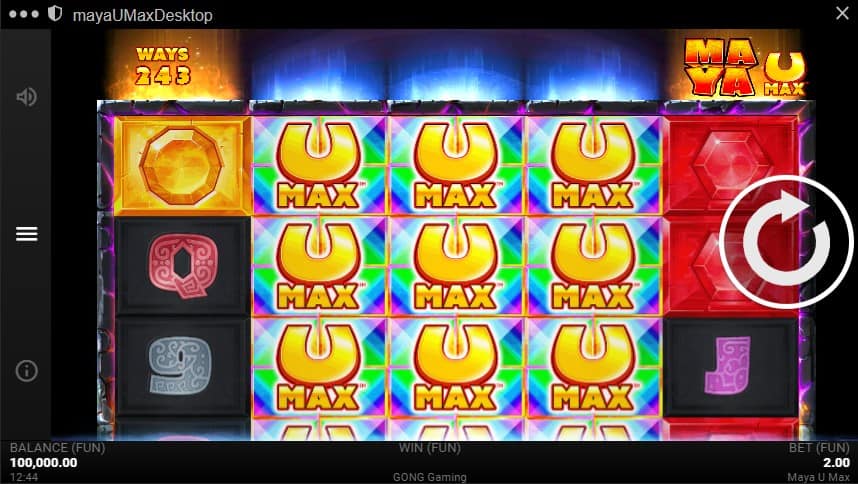 You pick a wager, somewhere between $0.20 and $12 per spin, and that’s pretty much it. The entire game area is available to you.

Maya U Max comes up with its own version of a reel expansion, which can take it from 5×3 reels and 243 ways to win, to a game area where up to 248,832 ways are active. For this, it uses the special U Max symbols, and turns them into four smaller symbols when they land on the middle three reels. At the top of those reels, you see the four symbols which will drop in the U Max positions, if they do show up.

To reach the maximum potential game area, you need U Max icons covering the entire three middle columns. It goes up to 15,552 ways during regular spins, and up to 248,832 ways during free spins.

The most common feature of all, would be the Wild symbol, showing off its own logo when it lands. You get to use it as a substitute, and that’s pretty much it. It only assists with the formation of regular winning combinations.

Otherwise, what you’re really looking for, is the free spins feature. It requires the Gold Idol scatters appearing five times, and it brings you 5 free spins at a minimum. Each new Idol adds 1 free spin to the total, going beyond the initial five scatters (up to 36 can be triggered). What changes, is that the Toppers (groups of four symbols) are now shown at the top of all reels, and the number of ways to win can get a lot higher. The free spins can be retriggered, 1 more round being offered in exchange for each additional scatter that lands.

Maya U Max can pay quite well, with 10,000x the stake appearing to be the highest reward that it will deliver. That’s a top prize of up to $120,000, which is excellent, even as the announced volatility is medium to high. Of course, this is the capped amount, the slot is capable of much more, since it has so many potential ways to win.

One aspect that could’ve been improved, is the game’s RTP, which is at 95.69% currently (I’d expect 96% or higher from a good slot machine).

Maya U Max and its way of expanding the game area, makes the experience an interesting one. There are a lot of other slots that will do something similar though, it’s just the mechanic that changes slightly. Many of those games will have both higher potential and better RTP, so there are definitely better choices available.