With Legacy of Oz, we’re looking at a Book-style slot machine, with mechanics that should be familiar to many. The difference is that we’re getting a theme that’s based on the Wizard of Oz. The quality of the design is excellent, but the selection of symbols wasn’t a big priority for them, and the result is a mix of potion bottles and Royals for its regular symbols.

It starts from the lowly 10 and goes up to the Ace, after which there are premium symbols showing potions colored in red, purple, and blue. The top symbol is going to be the one showing the Wizard, while the feature trigger (wild/scatter) is going to have the image of a Book.

Legacy of Oz is just one of the many Oz-related slot machines that have been designed by Triple Edge Studios for Microgaming, and we include here titles like Book of Oz, Sisters of Oz, or Book of Oz Lock n Spin. These are all good games, but the Book genre is not exactly unique, even if there are some new mechanics added to them. 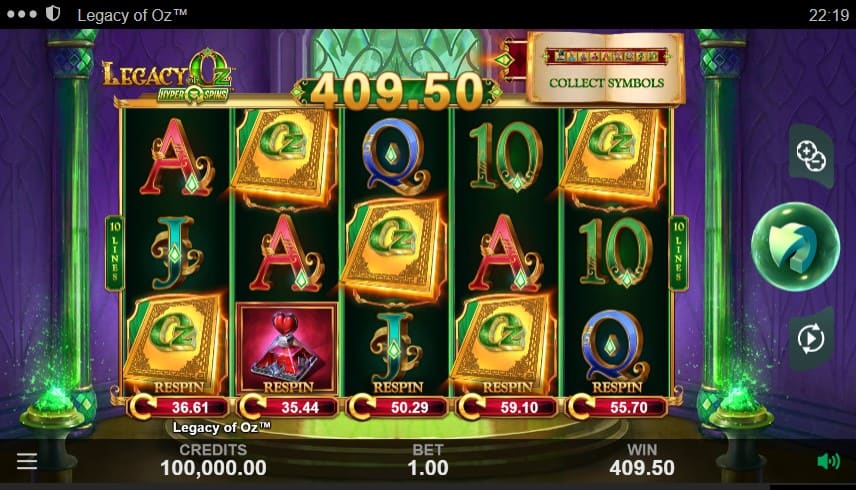 Mostly, you’re going to try and form combinations on one of the 10 active lines, present on 5×3 reels. It’s a standard setup for a Book-style game, and the winning combinations form the way they would everywhere else, at least during paid spins.

The main feature symbol is going to be the Book of Oz, which is the slot’s wild and scatter, so 2 roles in 1. You don’t get a lot of these scatters, so they’re not very useful as wilds either, since you don’t get them often enough in view. Still, they can help out at times, if they land in the right position to assist as replacements.

As you’d expect from a Book slot, there will be a special symbol chosen at random, to be given the ability to expand whenever they appear. If you get them on 3+ reels, they expand and you form winning combinations on all 10 lines. For these symbols, it’s not necessary to appear in a certain order, it’s enough if they land scattered on the same line at least 3 times.

There is a HyperSpin option as well, which allows you to respin individual reels, in exchange for an extra bet. New wins are not considered, the game only pays for the combinations that are improved as a result of respins.

Legacy of Oz can pay about as well as any other Book-style slot we’ve seen so far. 5,000x the stake is the most you’re going to see in a single spin from this game. High volatility should be expected, but the RTP can be OK at 96.11% (or lower if the operator decides to choose another value from the given RTP range).

While the Hyperspin option is a welcomed addition to the list of features, Legacy of Oz doesn’t really give us a lot that would be considered unique. The same features we see here, are also found in other similar slot machines, only the theme is not as interesting usually.