Hugely popular back in the 80s, and still well known to this day, Knight Rider was a TV series that had David Hasselhoff as its lead actor. The story revolved around this crime fighting hero, with help from KITT, a highly advanced car that had an AI-level computer onboard. This branded slot machine comes from NetEnt, and it uses images that were borrowed from the series.

For the first few symbols, of lower value, we find metallic-looking Royals, 10 to A. We then get better symbols in the top positions, ranging from digital watches, to trucks, futuristic steering wheels, and KITT’s red lights. We also see David Haselhoff as Michael Knight, the lead character.

It’s been more than two decades since NetEnt was established, and they’ve been one of the top names in this industry for a lot of this time. They have released hundreds of excellent slots over the years, along with a lot of other casino games. While a lot of their older content is designed mostly for casual players, recently they added quite a few high volatility options as well. 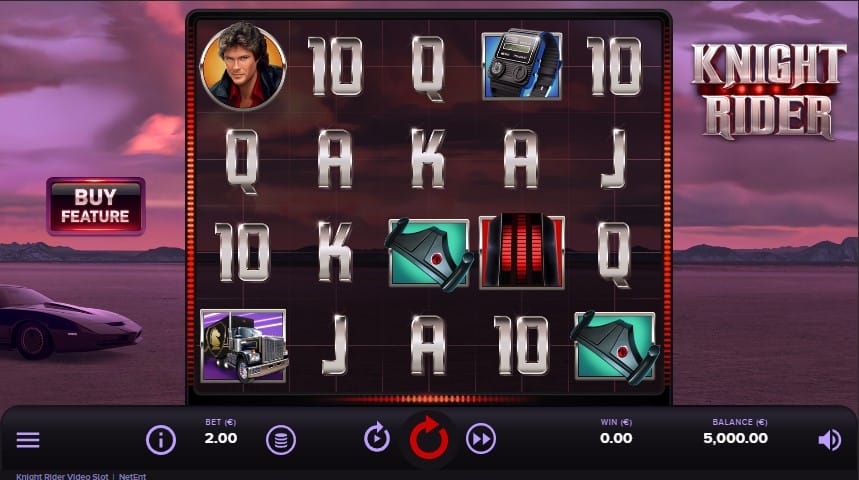 You can play Knight Rider with a bet that’s part of the range which is included. Anywhere between $0.20 and $40 can be used for each spin.

In exchange, Knight Rider comes with an unusual setup, where 26 paylines are present on 5×4 reels. Given the size of those reels, it would’ve been nice to get more wins out of it.

Multiplier wilds are going to help out when they can, and it’s one of the few interesting features that are coming with this game. You’re going to get the reel’s number as the multiplier for wilds landing on it. This means that for reels 1-5, the multiplier wilds boost wins by 1x to 5x. These are also Walking Wilds, so they will move towards the 1st reel each round, one position at a time. They’re going to be helpful for up to 5 spins, depending on where they show up.

The other major feature delivered by Knight Rider is going to involve the free spins. 10 rounds are won, when you get 3 scatters to appear on the middle columns.

During free games, you collect the Knight symbols (chess pieces) when they show up on the reels. You level up as you get multiples of 3 Knights in the meter. Each time this happens, you get 1 Laser Wild and 2 free spins. You can go up to level 4.

Up to 3 Laser Wilds are going to be added to the reels, as each round begins. They have the same mechanic as the base game wilds, so they apply multipliers and they move towards the left side.

You’re going after a decent top prize in Knight Rider, with 7,000x the round’s stake being the most that the slot will pay. Though you should expect high volatility from this slot machine, it also comes with an above average RTP of 96.07%, so it’s not all bad.

Knight Rider is a decent slot machine, designed to appeal to fans of the original series. As a branded title, it comes with several interesting features, good returns on average (licensed slots tend to pay worse since they cost more to make), and retro graphics that fit the theme.