The Hall of Gods Slot Machine game is an incredibly developed game for gaming enthusiasts who like playing challenging games. The 5-reel, 20-payline slot game has unique features that include among others: scattered symbols, a triple jackpot, a massive Midgard snake symbol, and free spins among other features.

The most amazing aspect about the serpent symbol that most players love is that it expands over the reels during game play. The game comes with high-end graphics thereby making it lovely and lively to play. This cross-OS game runs perfectly on different operating systems including Linux, Mac and Windows operating systems. 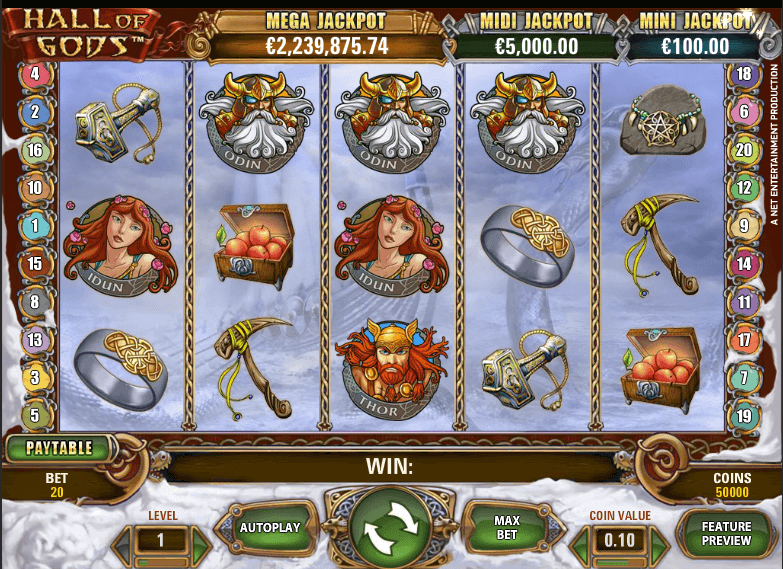 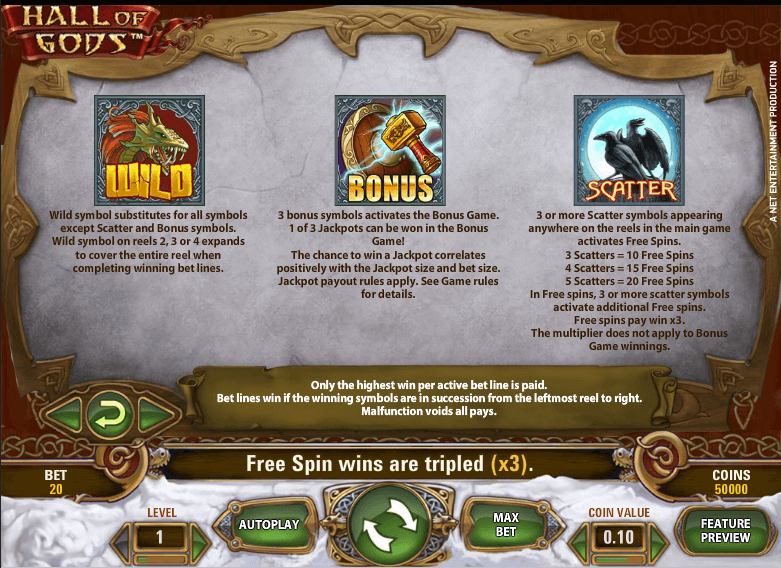 Hall of Gods Slot Machine Game is based on Norse mythology. The game has a one of a kind feature whereby players listen to a relaxing drumming music that plays in the game’s background during game play.

All symbols in the game are expertly crafted and embellished using outstanding Norse artwork that features scrolls and knots. The symbols in this multi-functional progressive jackpot game come in ten different designs with 5 designs being high-value symbols and the rest lower-value symbols.

The upper-hand symbols (high-value ones) feature the gods with the white-bearded Odin ranking as the top symbol followed by Thor, Freya, Loki and Idun being the lowest ranking symbol.

The other 5 symbols (lower-value ones) start with a gold ring as the highest ranked symbol followed by Thor’s hammer, a stone draped necklace, an axe, and a wooden chest with apples as the lowest ranking symbol.

The Hall of Gods Slot Machine game is an easy game to play as it does not have any complicated levels of game play. With its well indicated and illustrated controls coupled with user interactive windows, it is easy to play the game at any level.

On the control panel, game aspects such as coin value, bet level and cash available are clearly indicated. Reels start, flow, and stop smoothly with colored lines and symbols being used to mark spins and paylines.

Depending on your preference, you may turn on/off game sounds and set up Autoplay especially if you are not a well experienced player. With the Autoplay option, the game plays between 10 and 1000 rounds and only stops once it reaches the programmed level.

The Midgard Serpent symbol is the greatest symbol in the Hall of Gods Slot Machine game and substitutes for all the other game symbols with the exception of the Bonus and Scatter symbols.

When the serpent symbol lands on a winning bet placed on reels 2, 3 or 4, the symbol expands showing the whole serpent rising from water and screeching. You can activate the Free Spins feature with the Scatter symbol.

The game has an interesting bonus game concept whereby players get to play a bonus game when 3 or more scatters appear on the screen. The bonus game has different shields that players are required to break using a sledge hammer. To win, the players must break at least 3 or more similar shields.

The jackpot amount for each of these jackpots correlates to the size of the bet placed. There are 5 bet levels in the game with the lowest bet being 0.20 and the highest being 50. Coin values range from 0.1-0.50.

As compared to other slot machine games, the Hall of Gods game edges out as one of the most amazing, exciting and challenging slot games. The game has proved to be a consistently exclusive and fun-filled game to play even for players who are new to the game.

Play the Hall of Gods game at Vegas Paradise and earn a $200 bonus plus 100 free spins. Other benefits include access to 24/7 multi-lingual customer support from the comfort of computer.

Hall of Gods players at Jackpot Paradise enjoy a $200 welcome bonus package and 100 free spins. The casino has a secure money upload and withdraw system that supports most debit and credit cards as well as select banks and online money platforms from allover the globe.

Riches of Midgard: Land and Expand

Mercy of the Gods