King Kong Cash is a slot machine which was launched in the summer of 2016. Although it has been around for a few months, it was hardly very popular.

The main reason for this is that the slot received an exclusive launch. Now, its developers have chosen to give it a more widespread release.

King Kong Cash is, of course, based on the King Kong we all know and love, although you probably haven’t seen him quite like this before.

To be fair, he spends most of the slot snoozing by the side of the reels, so you don’t actually get to see him in action unless he triggers one of five randomly triggered in-play bonuses.

Blueprint Gaming have chosen to make this a cute and cuddly slot, which is quite unlike many of the other King Kong themed slots currently out on the net. The developers have opted for a rather predictable set up of 5 reels and 20 lines.

However, if you think that King Kong Cash is just another run-of-the-mill video slot from Blueprint Gaming, you are mistaken.

This slot contains a total of 10 bonuses, 5 randomly triggered in-play features and 5 bonus rounds. In that regard, Blueprint Gaming have tried exceptionally hard to make the King Kong Cash likeable and generous. It has kind of worked. 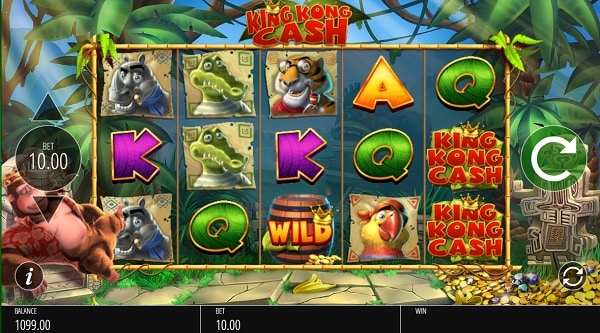 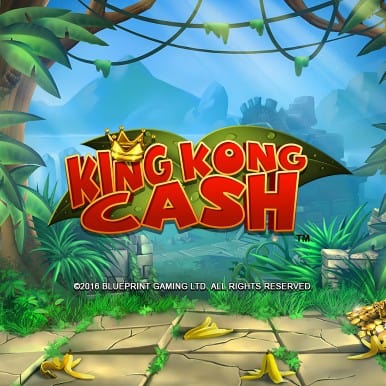 King Kong Cash’s wagering menu is tucked away neatly at the side of the reels. You will need to click on the bet button to adjust your wagers, which can range from as little as $0.20 per spin, up to as high as $200 per spin.

You can forget about altering the number of lines in this game. The simple bet button is all you are going to get. With a wagering range such as the one mentioned a moment ago, though, you don’t really much more in order to be able to wager as you see fit.

Wild symbol: This video slot contains a wild symbol, and it takes on the shape of a barrel. Using this symbol, players can pocket winning combinations with the help of a symbol that replaces all others, save for scatters. Aside from that, though, the wild symbol doesn’t really serve another purpose in the game.

Scatter symbol: Bonus scatters will trigger one of five amazing features in this slot. You need to land at least 3 of them to activate the King Kong Cash Bonus, which can decide which of the five features you get.

Bonus rounds: There is a total of 5 bonus rounds you can trigger from the King King Cash Bonus. These include the Barrel Blast, King Kong Trail, Empire Free Spins, Golden Kong Free Spins, and Big Money Bonus.

The features include both instant win games and free spin features. You won’t know which bonus you will get at the start of the feature, though.

Monkey Modifiers: Majestic Monkey Modifiers can be triggered at random in the game. When they are, Kong will wake up from his nap and offer you one of five in-play bonuses. These bonuses can boost your next spin in the base game.

King Kong Cash an RTP (return to player) rate of roughly 95.79%, and that means that it fits right in there with other Blueprint Gaming slots in terms of how frequently it coughs up the goods.

King Kong Cash is a bit of a boring slot in terms of theme. Kong does nothing but nap the entire time, and the imagery on the reels doesn’t do the title justice. These human-looking animals are a bit “child’s play” for most players.

However, in terms of features, you won’t find a better Blueprint Gaming developed slot.

The five in-play bonuses occur frequently enough, and although it can take a while before you unlock all of the bonus features, once you have triggered them all, you should be sitting on a rather pretty pile of cash.

As we’ve said, this slot was released exclusively in the summer, but it should now be available at all good casinos offering software from Blueprint Gaming.