Immortal Romance is a recent release from Microgaming, and a slot machine which has an entire story behind it, one which you can read about.

Each character of the game has a story, and a button that you can click on to read it. It appears to be a story of love, but one that involves vampires, hence the immortal part. It also has a gothic inspired design, which I’ve found quite appropriate in this case, and well made as well. The graphics are of good quality, with multiple main characters present and well drawn.

Symbols start you off with six gothic style poker cards, then you have papers, castles, door knockers, logos and the four characters. Their names are Amber, Troy, Michael and Sarah. You can read their stories from the paytable section, by clicking on the Story buttons found on the pages which explain the free spins.

When you’re talking about a developer like Microgaming, it’s not really necessary to explain who they are, not to someone that has played slots for any length of time at least.

The developer has been around for over two decades now, and they claim to have been the first ones to release software for online casinos, as well as the first mobile platform back in 2004. Innovation is clearly something they can do well, and they seem to have spent a lot of time with Immortal Romance, especially feature wise.

PLAY FOR FREE HERE BELOW: 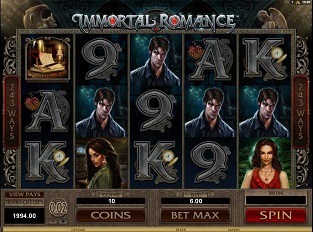 The game lets you use a lot of coins, but their value will be quite low, and so you end up spending at most $1 for one active line. The slot relies on 30 active lines for betting purposes, but normally it has 243 ways to win. The line bet has up to 10 coins of $0.10 or lower in them. The maximum bet only goes up to $30 unfortunately.

It’s not some cute vampire game, going for the darker angle instead. The gothic building in which the action is taking place helps with the atmosphere, and the same happens when you look at the betting options or the decorations used around the reels. There are statues of angels and golems, there are libraries and there are the four vampires, two men and two women.

The most basic feature that the game has is its wild symbol. Having the Immortal Romance logo to represent it, the symbol will be used in various combinations together with regular symbols. It uses a 2x multiplier to double those wins, and you should be able to see it fairly often since it is part of a game with ways to win, where it’s easier for it to be helpful. It doesn’t help with the scatter though.

At random, as you play this game, you might trigger a feature called Wild Desire. It will turn up to five reels into wild variants, bringing you a lot of wins.

Finally, the main feature of this game seems to be Chamber of Spins. You get it when you have the Door Knocker symbol scattered in up to five positions.

You start off with the Amber free spins, and then you unlock the ones associated with Troy (5th trigger of the feature), Michael (10th trigger) and Sarah (starting from the 15th time you trigger the Chamber of Spins). You get all sorts of features (rolling reels, wilds, multipliers and others), and between 10 and 25 free spins.

The big payouts in the game will come through the scatter (up to $6,000) or through the wild symbol (up to $1,500 in the base game). 6x multipliers from certain free spins can improve the jackpot a bit, taking it even up to $9,000.

It’s not a typical teen vampire theme, and because of that I think that it’s more enjoyable.  You still get the four attractive vampires though, they didn’t go for the monster look.