Ever wondered what it would look like, to have a Yeti in a tropical location, on vacation. Play n GO certainly thought of that, as that’s exactly the theme that they’ve gone for, in their newest slot machine, Hotel Yeti Way. I love the design, the quality is as good as it gets in a modern slot these days, and it’s showing us a Tiki hut in the background, while the reels host a mix of related and unrelated symbols.

The unrelated symbols are the low paying ones, with Royals going from the Ten to the Ace. The themed ones show the Yeti as a wild, along with a Shark, Hat, Sunglasses, Flip Flops, and Sunscreen.

Hotel Yeti Way comes from Play n GO, a developer with a reputation built on a large collection of high quality slot machines. I enjoy most of the games they release, which is a big point in their favor, as far as I’m concerned. Since they have a large collection, it should be easy finding a game you will like, both story and features wise. Regardless of volatility, their games tend to offer at least 5,000x the stake as the top jackpot. 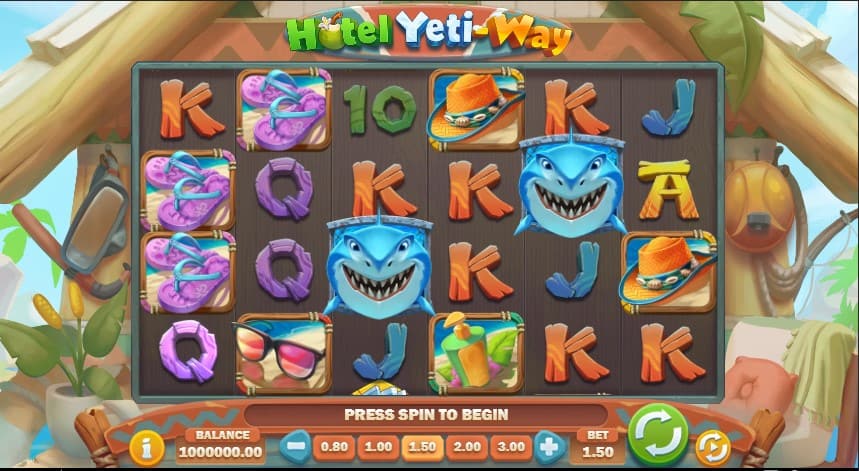 Starting off in Hotel Yeti Way requires that you place a wager, using one of the values listed in a range from $0.10 to $100.

In exchange, you’re getting a slot with 6×4 reels and 4096 ways to win, but as the game area expands, you could find yourself playing with up to 262,144 ways to win. The ways to win system requires 3 or more matching symbols, landing left to right on adjacent reels. There are no fixed positions in which those symbols need to be in though.

Help will be coming from the game’s wild symbol, a substitute that does its job by being at the right place and time. You need it on a certain reel usually, but the exact position doesn’t matter, since the slot uses ways to win.

There is a second version of the wild, the one with the Yeti in it, that’s a bit more powerful. For one, it can form combinations directly, paying as much as 3x the stake. It also triggers a random feature though, out of the three mentioned below. These are described as activities that the Yeti is doing:

As for the free spins feature, you reach it when 3 to 6 scatter symbols appear, giving you 8 to 20 rounds. There is a version of the free spins for each of the three activities I mentioned previously, guaranteed to trigger for each appearance of the Yeti Wild.

In this mode, you also get a way to expand the game area. It’s a random event, that will apply a multiplier for one or more reels. If all are multiplied by 2, giving you 6 rather than 3 symbols, then you could have 262,144 ways active.

I really like the potential rewards offered in Hotel Yeti Way. 30,000x the stake should sound like a proper top jackpot to anyone, regardless if they’re casual or experienced players. It’s highly volatile (10 out of 10 rating), and the RTP is 96.18%.

Overall, I like what they’ve done with Hotel Yeti Way, and I enjoyed the potential rewards and features of this one. I also doubt you will find a lot of players that would have something bad to say about the graphics.