Hell’s Kitchen borrows from a well known TV show, which revolves around a loud-mouthed British chef, which goes by the name of Gordon Ramsay. Known for his powerful personality and rather rude remarks, he’s also an excellent cook and he has a lot of fans, all over the world.

The game they designed with this branded license isn’t giving us a lot that would remind of the show though. You might see some of it in the background image, with the devil’s fork seen in the blue and red decorations used on the two sides, and there are all the usual Royals and foods among its symbols. Hamburgers, meat courses, cocktails and sweets, they’ve all found room among the top symbols of this one. Wilds and scatters are also part of the collection.

Considered a top 3 developer of online slot machines, NetEnt has been doing it for a long time, creating content for the online market since the late 90s. They’ve designed a lot of branded titles over the years, but they have their share of regular slots as well. 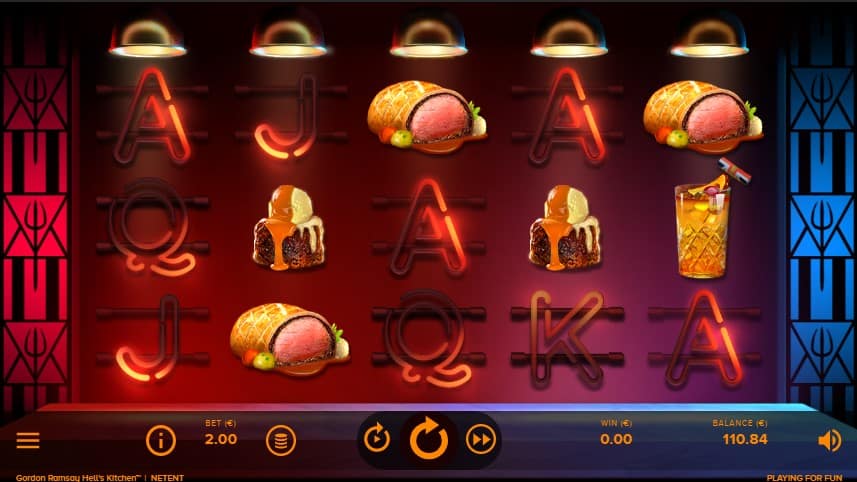 What the game gives you in exchange, is 20 active lines, which are found on 5×3 reels. There are two sides, so it’s a competition between the player and an opposing side. The team connection is especially important for the free spins.

You will discover that HK logo wilds are in play, and they could prove useful over longer periods of time, once they get enough chances to show up alongside regular symbols, and form new wins together.

A random wild feature, called Ramsay’s Wilds, may also trigger at times. If it does, you get up to 7 of these extra wilds on the reels, to use in new combinations or improve existing ones.

Scatters are also present inside, though only on the first two and last two columns. Have 3-4 land, and you get either 10 or 15 free rounds in the Team Challenge bonus. The two sides are even clearer in the setup, which will have two sets of reels to play on, each one for another team (blue or red). You decide which color is yours, and then you play through the free spins.

You will benefit along the way from random features, which are given either to the blue or red teams. Among these extras, you can find regular wilds, along with 2x and 3x multipliers. If you get several multipliers for one of the teams, then their values get added up.

Both teams get you paid, but if your chosen side wins the competition, or if it ends up in a tie, then you also get access to a bonus feature. It’s relatively simple, you have to make some picks and get prizes and multipliers. Once you lose the 3 lives that you started with, by locating X signs, the feature is over.

Like a lot of other NetEnt slots that we’ve seen over the years, it’s coming with low volatility and adequate payouts for that kind of reward. Up to 1,000x the stake is about the best it can do, though that’s not bad for a game of that volatility. RTP wise, it’s at 96.07%, which I’m also happy about.

Branded slot machines are the kind that a lot of people want to try out, so the lower volatility was expected. The RTP is pretty good, particularly for a branded title with higher development costs. The downside is that we don’t get to see Ramsay on the reels, though we do hear him making his usual remarks, so there is that at least.