Fantasini Master of Mystery is themed around the sleight of hand, illusions and tricks of the stage magician. A magician never reveals his tricks, because he is a mysterious fellow.

That is the energy that Net Entertainment were trying to bring to the reels, when they designed this game.

Net Entertainment are a Swedish game developing company, based in Stockholm. Their games are renowned for overall visual excellence. Net Entertainment, and one of the largest online slot developers. Their European online casino market share, is approximately 31%.

The company began in 1996, out of Scandinavia’s land based operator known as Cherry. Land based slot machines were made illegal. This legislation was the push that created Net Entertainment, one of the largest slot companies in the world. 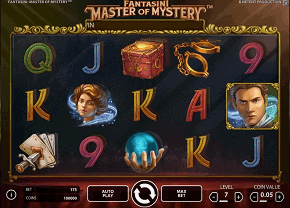 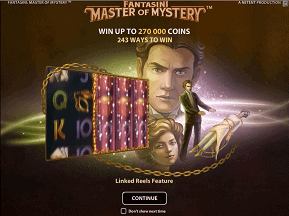 Fantasini Master of Mystery has a dark colour scheme, because dark is mysterious. The background of the slot is a hazy ambiguous smoke, with a green and pink tinge, which stage lights dance over. It is a five reel slot, and mentioned reels are white, which offset the darker colours of the game perfectly.

This is a great looking slot, which perfectly captures the essence of the theme. The panel is simplistic and located at the bottom of the slot. It has plain white buttons over a slightly darker background. This design is a great use of colour and space.

Fantasini Master of Mystery, is a 243 payline slot. The reels are spun with the Spin Button, and as is common in Net Entertainment slot the bet level and coin value can be adjusted.

Wins are played left to right, meaning that the first symbol of a winning payline needs to be in the furthermost reel to the left. For more information about paylines, bets and symbol values the player can press the Info Button, which will bring up the relevant information. The minimum bet is $0.25 and the highest bet is $250.

Fantisini Master of Mystery has a Linking Reel feature, in the Base Game that is triggered each and every spin. It works by linking two adjacent reels to one another so they show the same symbols.

It will potentially expand to link all of the reels together, at which point the player is guaranteed a five in a row win. The Magician Symbol is also wild, and it will substitute any symbol in the game to make the highest available winning payline.

Fantasini Master of Mystery, has a maximum pay out of 270,000 coins, which is displayed on top of the interface. A symbol win, in coins is equal to the value of the symbol multiplied by the bet level and the amount of times that symbol appears on each of the reels.

This is a standard Net Entertainment win calculating formula. The total win in currency, is equal to the total win in coins multiplied by the coin value. The highest value five in a row win is the Magician’s Assistant worth 1000 coins. But using the first formula the player can calculate potential wins that are much higher than this, up to the celling 270,000 coins.

Fantasini Master of Mystery, is a well-designed game. The Linking Reels features leads to some impressive wins, some of which are simply handed to the player because they were lucky enough to link all five reels. The jackpot is a good and proper figure. This game is let down by its lack of features. Apart from the Linking Reels feature, this game does not have another feature.