It’s a regular Wild West themed game, but with the advantage of having some excellent graphics to show off.

The images are comic book like in quality and drawing style, and I loved them. They show you several Wanted villains, along with a zombie sheriff and more Royals than I like to see.

When it comes to developers that offer impressive online slots on a regular basis, Play n GO is one of the favorites. The slot machines that they’ve been releasing have always been spot on in terms of graphics quality, and typically they do well feature and payout wise as well.

As a potential downside, I’d mention the fact that they offer casinos the option to set a smaller RTP for their slots, so I’d recommend you play their games at casinos which are based in Malta, or which list the RTP for the Play n Go slots at 96% or higher. 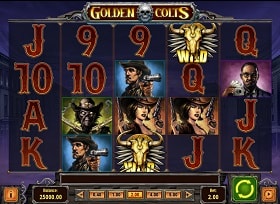 The Play n Go titles seem to share the same style of arranging the bet options, all of them being listed at the bottom. The range which is available in this case is between $0.20 and $100.

Expect to find a slot machine with 5 reels & 40 paylines here. It delivers a lot of cool features, but they don’t require that you learn anything special. You just spin the reels and enjoy the action, following the instructions from the screen, if there are special features triggered.

The simpler feature available in Golden Colts comes in the form of the Cow Skull Wild, a symbol that you can also get to form its own combinations, not just act as a substitute. Having up to five wild symbols arranged on the same line will get you a win of up to $1,250 (12.5x the stake), which as it happens is also the best paying combo of the game.

The Skull icon is your scatter, and through it you can obtain access to the bonus feature. It’s actually giving you 7 different bonuses, so you don’t get bored too easily with the game, thanks to all that variety.

Law of the Wild: 1 free spin, with stacked Sheriff icons on the middle reels and 1 re-spin triggered when the symbol covers a reel.

Gunslingers: up to 30x multiplier awarded for the wins of the 1 free spin that’s offered.

Poker Play: 1 free spin with a sticky 2×2 symbol and with re-spins possible if new Gambler icons appear. They also act as wilds.

Furies: you get 1 free spin, with two sticky 2×2 Girl symbols.

Most Wanted: the 7th feature, a bonus game where you make picks from the 20 Wanted posters.

In terms of rewards, Golden Colts will pay up to 2,500x the stake, though it looks like it should be capable of doing even better, particularly when you find out that 30x multipliers are possible during certain moments. Either way, it will pay at most $250,000 here, which is a decent top payout for a slot.

Since the RTP is at 96.55%, the game can be expected to be fair to its players, at least compared with most slot machines, since that kind of number is found in new releases, less so in older ones.

Golden Colts has a couple of things that you will appreciate about it, such as the 2,500x payouts offered while keeping a Medium volatility, or the long list of bonus features which the scatters can trigger.

Charlie Chance: In Hell to Pay