Coming from a developer like Play n GO, that seems to release only slot machines with great designs, it looks like the story of the goddess Inari Okami is in good hands. I love what they managed to do in Tale of Kyubiko, a slot where the Japanese deity is in the main role. It’s not coming with a large game area, but it’s doing well enough as it is.

Tale of Kyubiko has a variety of symbols to make the action interesting, starting from the stacked wild with the goddess, and continuing with the fox version, but also with images of a mask, monkey, toad, and bird. The last four are symbols showing paper lanterns which have the card suits on the side.

Established in the late 90s, and based in Sweden, Play n GO has about 300 casino games available for online operators, over 250 of which are made up of their slot machines. Rewards of 5,000x or higher, medium or high volatility, great designs, these are characteristics that seem common for all these games. 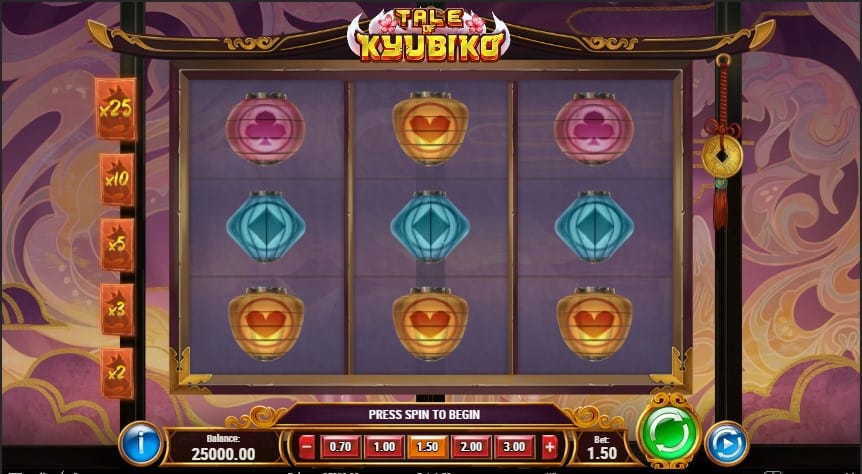 Play n GO tends to make their slot machines easy to play, and the bet options are a part of that. The range of $0.10 to $100, which is present here, we find in a lot of other games of theirs.

Even though it doesn’t play like one, initially Tale of Kyubiko could be considered a classic slot by many, since it comes with 3×3 reels and 5 active lines. The features are all modern though, and the experience is going to be much more interesting than it lets on initially.

The Fox Mask is going to be one of the two wilds that you can get in this game. Landing on all reels, it will also form the best-paying winning combinations, with up to 10x the stake offered on each of the 5 lines. This is a regular-sized symbol.

Next, we have Inari, as a white fox, landing on the slot’s reels as a stacked wild. It’s going to try to be part of other winning combinations, and when it succeeds it will trigger a respin. It also moves to a different reel, for that respin. The respins continue if you can manage to form new winning combinations during the respin.

A multiplier is also included, and it goes up after each respin. Its upper limit is set to 25x.

Inari’s Fortune is a mechanic that allows the goddess to move in position, nudging to cover the entire reel, if it didn’t take it over already.

Tale of Kyubiko was designed to be much more accessible than other slot machines from Play n GO, and you can see it in its medium volatility, but also in the lower rewards. Up to 2,250x the stake will be paid by the game, but that’s only during the luckiest spins possible. Otherwise, it will pay little, up to 10x the stake for each of the 5 lines being the typical result of a spin. Luckily, there are impressive multipliers and respins, that boost its potential.

Overall, Tale of Kyubiko is the right slot machine to check out, if you’re not looking to risk too much, but you still want something fun and with decent potential.