With a gold mining theme and action which takes us back to the times of the Wild West and their gold rush, Gold N Rocks is a slot machine which is available at Microgaming casinos.

You have a game which  features a large area to play on, where symbols are going to range from images of dynamite and oil lamps, to pickaxe, gold nuggets in bags or mining carts, the entrance to the mine or the Gold n Rocks logo. As a wild, the image of the Sunset has been chosen.

It’s Microgaming that is offering this slot machine, and it’s exclusive to their platform, but the actual developer is called Golden Rock Studios. They’ve done a good job with this release, and as they’re partners with Microgaming, you can expect to see more games from them in the future. 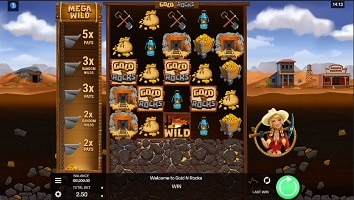 Playing this slot machine requires a bet of $0.50 to $50, for each spin that you go through. It’s for a Cluster Pays system, so all potential wins are covered.

Starting off with 5×5 reels, the game area can double at times, to 5×10 reels. Either way, you get paid through the same combinations of matching symbols, when enough of them are next to each other. They need to appear either on the same row or the same column.

Following the formation of a combo, you get paid, but then something else happens. The Tumbling Reels mechanic will trigger, bringing you additional symbols to replace those that were in the combo. If this leads to new wins, then the tumbles keep coming.

The Tumbling Reels will also boost the size of the game area, adding 1 extra row each time this happens. With 5 Tumbles in succession, you could end up with 5×10 reels. What’s interesting here, is that while the rows remain of the same size, columns can now accommodate wins of up to 10 symbols, and the game’s potential goes up significantly.

As you get more wins, you also get the meter from the left side to fill up. It’s going to trigger various features for you, as you advance, starting off with a 2x multiplier, then adding 2 extra wilds on the reels, a 3x multiplier, more extra wilds, and eventually a 5x multiplier as well. These you get one at a time, and you use them immediately.

Should Dynamite scatters land in view, a minimum of three times, Gold N Rocks will trigger 8+ free spins. The meter is still important, but you get better modifiers from it, including up to 10x multipliers.

Finally, a totally random feature, but which sounds impressive, the Rollercoaster Free Spins will deliver 100 rounds for free.

For a game like this, the rewards can be impressive, and the slot machine will pay up to 6,094x the stake in a single spin. Multipliers certainly have something to do with that. Volatility will be high, but at the same time you should know that it’s fair if we look at the average player’s chances (RTP is 96.09%).

Gold N Rocks is a game that I found to be quite enjoyable. Not a typical slot machine, as far as game mechanics are concerned, and with big enough rewards to make things interesting, it should appeal to experienced players.

Titans of the Sun Hyperion