We’ve all seen god-themed slot machines in the past, it’s one of the most common choices that developers make when it comes to the stories they use. However, get all those gods and mythical figures on the stage at a rock concert, and you’re looking at an entirely different type of story. It’s what Gods of Rock promises, and it’s a brand new Thunderkick release with excellent graphics and big potential.

9 to A Royals are going to be the first half a dozen symbols that you can use. The next ones show us Medusa, Anubis, Athena, Thor, and the Devil. A Rock On symbol is also deployed inside.

A medium sized developer, Thunderkick offers more than 50 slot machines at the moment, which include a lot of great releases, often enough popular due to their features and graphics. Some of the fun ones these days, include Esqueleto Explosivo 2, Divine Lotus, and Riders of the Storm. 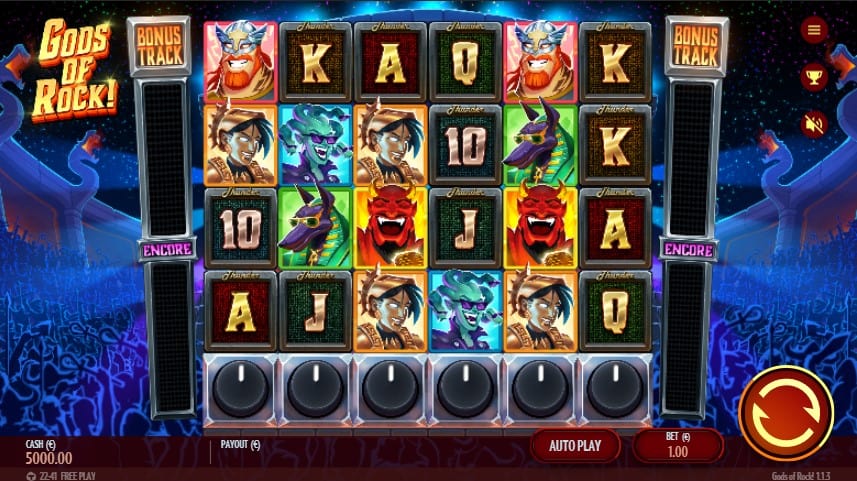 As is usually the case these days, there is a list of bet values that you can choose from. The range included will be between $0.10 and $100.

It’s a fairly large game area, with 6×4 reels, where you will only find 466 connecting pay ways (paying both ways though). You need the symbols to be next to another one that matches, it’s not enough that they’re on consecutive reels. Still, you get a lot of chances to form winning combinations, especially since they will form both ways.

This is the type of game to include exploding symbols, meaning that the winning positions are cleared, allowing for others to come down. As you keep doing this, and forming new combinations, you fill up a meter. Get 30 symbols that have exploded in a single round, and you trigger the Wild Encore, while with 55 symbols you trigger 8 free spins.

The Rock On symbol is considered a Charged Wild. You may use it as a substitute, but it doesn’t stop there. First, its appearance will give a boost the reel multiplier, seen at the bottom of each column. Second, the wild will explode and will remove all symbols that surround it.

Speaking of the reel multiplier, it will apply to all winning combinations formed on that reel. If you’re lucky enough to have several reel multipliers in a combo, they all multiply each other, to give a bigger boost to prizes.

Wild Encore is a feature that adds up to 3 Charged Wilds in random locations (which explode and boost reel multipliers, as mentioned above).

If you can manage to get the 8 free spins triggered, you will no longer reset the meter after each round. Instead, it keeps accumulating exploding symbols, and once it’s full you will get 3 more rounds added. The same goes for the multiplier, it is going to go only up, and the starting value is the one from the triggering spin.

I think you’re going to be just as much of a fan as I am, of the potential that Gods of Rock has. 20,000x the stake is an excellent top jackpot, even for a modern slot machine. The downside, as always, is the high volatility of the game. Its RTP is at 96.05%.

Overall, I think that Gods of Rock is a very good game. The extra risk it carries can be an issue for players, but with big rewards, loads of features, and an excellent idea for its theme, it has enough pros to be a great pick.