As far as pirate-themed slot machines go, Dead Man’s Fingers has some pros and cons to it. On one hand, it’s got high quality graphics, particularly if we go by its stacked main symbol, or the beautiful image of tropical islands and pirate ships from the background. On the other hand, the majority of its symbols are simple, and while the quality of the design is not disputed, they’re not very interesting to look at.

Besides the Pirate Captain (a dead one by the looks of its skeleton hand), it’s a game with five types of skull coins in low paying positions, and four types of gems in the top ones. The Octopus is the wild, and a Compass is the scatter. The Collect mechanic works through Treasure Chests and Collect Skeleton Hands.

Dead Man’s Fingers was designed by Gluck Games, but it’s thanks to their partnership with Yggdrasil that you get to play it in a lot of online casinos. When you look at the works of either of these developers, you will discover a lot of similar high quality designs, with plenty of cool features, so they’re among those you will not regret checking out. 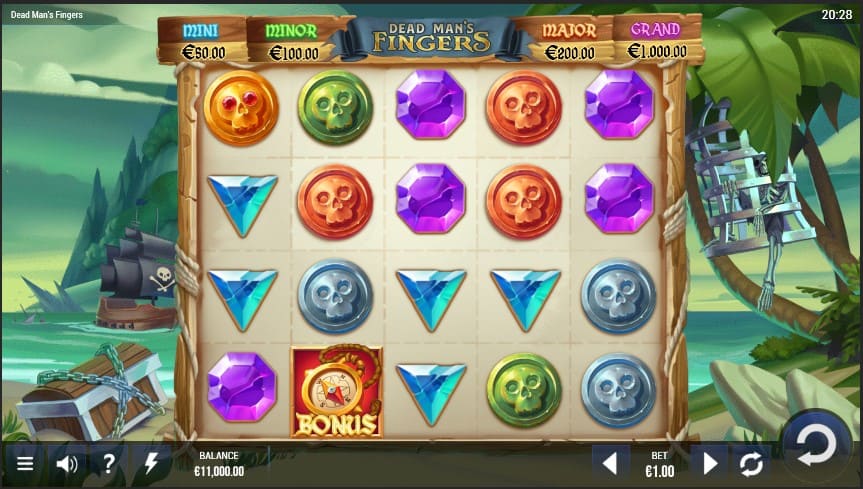 As is often the case these days, playing Dead Man’s Fingers is done with a wager picked from the offered range, of $0.25 to $100.

25 paylines are active each spin, and they’re using 5×4 reels as support. Combinations form with 3+ regular symbols, but the top-paying Captain will manage to pay a small amount even with 2+ symbols in a combo. The combinations form starting from the leftmost reel.

One of the three major features that are going to be used in Dead Man’s Fingers, the Octopus Wild will show up on the reels 2, 3, or 4. From those reels, it acts as a substitute symbol, which will only replace regulars if it ends up getting you a new combination. It doesn’t do anything for the feature symbols.

Another one to watch out for, is the Treasure Chest, or the Quickhit Money symbol, as they call it. It carries with it a prize, either regular or fixed jackpot (up to 1,000x the stake), but it can be collected only if you also land a Collect symbol on reel 5. If that happens, all treasure chest prizes are collected and paid to the player. You can get up to 20x paid through regular symbols, and 50x to 1,000x through fixed jackpots.

There will be free spins for you to claim as well, 10 of them, and they require 3 Compass Bonus symbols on the reels. Land another 3 after that, and the feature retriggers.

Dead Man’s Fingers has a relatively low return, so it doesn’t give great odds, at least if you compare it with other pirate-themed slots. 95.20% is considerably lower than the 96% we’d want to see in any game of this type.

This appears to result in lower payouts as well. 2,740x the stake is the best prize offered, and it’s not a lot for a medium-high volatility experience.

Dead Man’s Fingers does get a couple of cool features, and modern graphics, but I doubt it will be enough to top what a lot of other similar slots have been doing.