The return of Dazzle Me in Megaways form is going to feature the same classic fruit theme, so not as much has changed in the graphics department, as you might’ve wanted. The setup is one with 6 reels of different sizes, going from 5 to 9 symbols, as you go left to right. It’s not the standard approach to a Megaways slot, but they make it work.

As for the major and minor symbols that will be seen on those reels, the choice is obvious, as this is a classic. We’re going to see the Diamond in the wild’s role, along with the Free Spins logo for the scatter. Lucky 7s, Bells, Hearts, Clovers, and half a dozen gemstones in just as many colors, these will be your regulars.

It’s a game that’s available from one of the giants of the gaming industry, NetEnt. Creators of hundreds of slot machines and other casino games, they have been around since the 90s, and they’ve been flourishing thanks to the quality of their work. The design is a major pro in most of their games, and often enough they offer a lot of good features as well. High volatility slots are much more common in their collection these days, while their older titles are mostly designed for casual players. 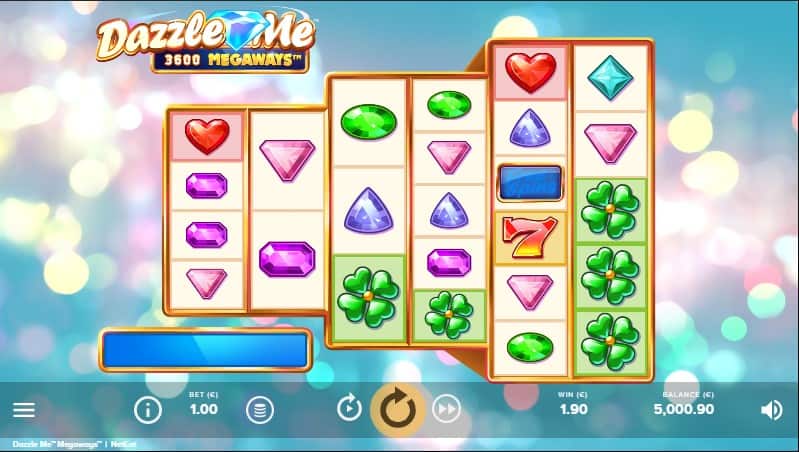 As for the game area that you get to play in, there will be anywhere between 2 and 9 symbols appearing on each reel, and it’s totally random. There are as many as 99,225 Megaways that can be active for a single spin. Avalanches are going to trigger after each win, taking the symbols involved away, so that new ones can land in those spots.

One of the noteworthy features that you will encounter in this game, the Dazzling Wild Reels are randomly awarded at any point during paid spins, and they’re always on for the free games. The slot selects up to 3 reels during these rounds, out of the columns 2-6. These reels are now covered only with wilds, though regulars can also sneak in during Avalanches.

Diamond wilds are going to be available, and they’re going to behave in the standard way, acting as substitutes when possible.

With the Free Spins logo on the reels, it’s clear what you can expect from them. These are symbols that you need landing 4 to 6 times, getting you 8 to 16 rounds. In this mode, the Dazzling Wild Reels are active each round, with 1 or more columns being covered by substitutes. You get only 2 wilds initially, but as you use wilds to form combinations, those reels will get their number of wilds up.

I loved the potential of Dazzle Me Megaways, but it’s not unusual for a slot machine that uses this particular engine. 20,000x the stake is definitely a motivating top payout, and it can be transformed into $1,000,000 (maximum bet required).

What’s even better, is that the volatility of this game is only a medium, even though it’s capable of paying so well. RTP can be OK, at 96.10%, but it can also be lower since an RTP range is provided by the developer, and casinos may choose to use it.

Dazzle Me Megaways is a great sequel for the original game, with increased volatility, but also much better top payouts. The downside is that the RTP has also dropped a bit.