You can call it a fantasy themed slot machine, but there are also elements that have to do with ice and snow. The Arctic Enchantress looks like a sorceress, in a revealing outfit despite the cold, but holding a magic staff. The view in the background is desolate, one of ice and snow, and with a castle in a corner.

Among the slot’s symbols, we discover the Royals, designed in story-like font, along with images of white-colored animals (owl, fox, polar bear), red roses, and pine cones.

Like with most of the recent slots that we’ve seen from Microgaming, this is also a release that’s coming from one of their partners. Neon Valley Studios is the designer behind the game, and other examples of their games that you can find at Microgaming casinos, include Queen of Alexandria WowPot, Age of Conquest, or Atlantean Treasures Mega Moolah. 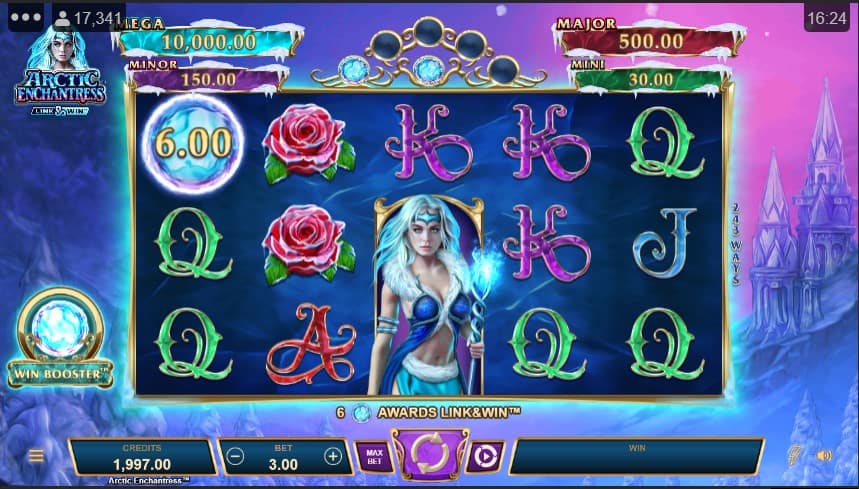 You can form up to 243 winning combinations, while using the same number of ways to win. 5X3 reels are there to spin for you. Getting a win is not that different from any other slot, so you just need anywhere from 3 to 5 symbols of the same type, landing in adjacent positions from left to right and on the same line.

One of three major feature symbols that are found in the game, the Arctic Enchantress appears on the reels as a stacked symbol. This is a wild, which you can rely on to act as a replacement for other types of symbols (only regular ones though). Sometimes, even though it lands only partially visible, it will be nudged by the game and it will end up covering the full reel.

Through scatters, the ones showing the Golden Palace, you can get into the free spins. Depending on the number of triggering scatters, 3 to 5 possible, you will get 10 to 20 free games, along with a small prize of up to 10x the round’s bet. There is a small advantage to this feature as well, as the stacked wild always ends up covering the reel.

They’ve added the Link & Win respins as well, and to get inside you will need to have 6 or more Ice Orbs collected in a single spin (fewer if you have the Win Booster bet active, as you get one for free then).

The feature should feel familiar, if you played Hold & Win style games in the past. You have 3 respins initially, and you get them to reset back to 3 whenever you land additional orbs. Each orb brings a prize, which is only paid at the end of the feature.

Column Boost is a feature that’s part of the Link & Win respins. First, you need orbs landing on all positions on a reel. If that happens, the prizes paid on those reels will be increased.

At the end of the feature, once you’ve run out of respins or you filled all positions with orbs, you get a prize of up to 50x the stake from each one. There are also jackpots of up to 5,000x the stake, which can be paid inside.

With the Mega Jackpot paying 5,000x the stake during Link & Win, it’s not a surprise that Arctic Enchantress can end up with rewards of up to 5,416x the stake. Highly volatile, this game also has a 96.1% RTP.

Arctic Enchantress doesn’t have a lot of original features, as most of them you can find in other slot machines, even from the same developer. Still, it’s a solid option for anyone that’s into Link & Win style games.