We’re looking at the second slot machine of this type from Yggdrasil Gaming. Cazino Zeppelin Reloaded is obviously a game where they tried to improve on the original, but they didn’t do it through its graphics. We’re looking at the same story and main characters, in a cyber punk inspired setting, with a zeppelin which was turned into a casino. While the surrounding decorations changed somewhat, the symbols you see inside are pretty much the same ones as in the original.

It starts with a couple of card suits, four of them as usual, and then it goes on to the four gamblers which are the top symbols. We then move on to the image of the dealer, a young woman with hair colored in blue and purple, which is going to be the wild in this case.

In just 10+ years, Yggdrasil Gaming managed to become one of the major developers in this industry. They’ve launched a lot of slots of their own, and these days they also partner with smaller companies to help them put out content for their network. There are a lot of games to choose from there, and I’d recommend most of them. 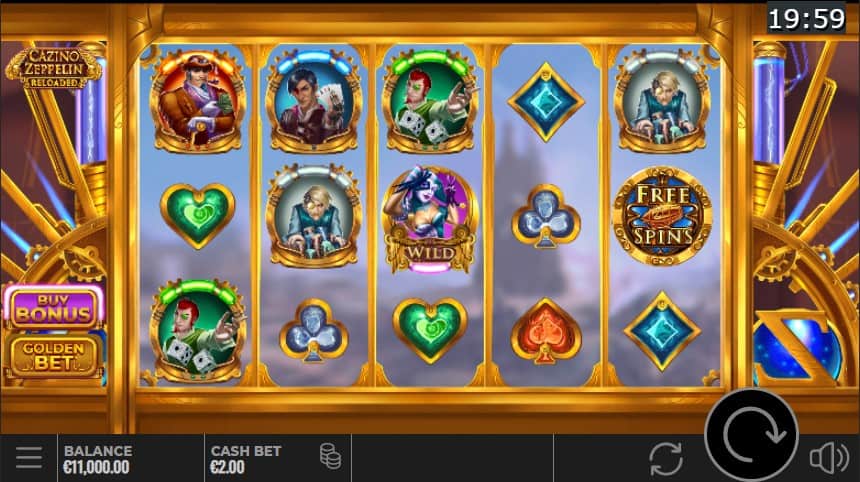 With 11 bet values that you can pick from, the amount going into each round can be anywhere from $0.20 to $10 per spin.

As its setup, it uses 5 reels along with 20 paylines. Nothing unusual there, and the combinations form left to right, with 3+ matching symbols. Only 8 regular symbols are used, so it’s not as difficult to form a combo as in other slots.

First of all, we have the wild, a symbol showing us the image of the dealer. She lands with a random multiplier for each reel, ranging from 1x to 5x. If you end up with 2+ wilds in the same combo, they add up their multipliers, to decide by how much the prize gets boosted.

While with 2+ scatters you get only a small prize, with 3 to 5 you also receive 10 to 20 free games. The triggering round’s wilds are going to be used during the free spins, in sticky positions, and their multipliers are also kept intact. However, any new wilds that land in this mode, will not get a multiplier initially. Their multiplier, and those from the initial wilds, goes up by 1x whenever a new wild shows up on the reels.

With sticky multiplier wilds that keep accumulating, it’s clear why the free spins can be so powerful, and why the payouts of this game improved massively compared with the original.

Unfortunately, you can only retrigger the feature once, and with 5 extra spins given. This happens when you get sticky wilds on all 5 reels.

Cazino Zeppelin Reloaded ends up paying about six times more, compared with the first slot machine. Highly volatile, it will deliver wins of up to 41,572x the stake, which is impressive by any standards. I like the RTP that’s being used as well, a 96.40% that’s high enough to be an advantage for the game.

Cazino Zeppelin Reloaded looks like an improvement over the original, though only when it comes to features and rewards. It’s a shame that they didn’t put a bit more effort into its design as well.