Set in North America’s wilder regions, in the prairie to be more precise, Buffalo Stack ‘n’ Sync doesn’t show us anything we haven’t seen before. The Wild West genre introduced the entire world to the wild side of the continent, and the images we see among its symbols are coming from the same region. Cactus plants and rocks are the only ones you see in the background, but even those are a good fit for the slot’s theme.

The usual 10 to A Royals are present in the low paying positions here, but they’re made out of stone, with a different color shadowing each one. The next five symbols are the ones with the Wild Horse, Cougar, Wolf, Eagle, and Buffalo. Cactus Wilds will also be there, along with some bonus symbols.

Offering a large collection of over 90 casino games, Hacksaw Gaming has most of those in the form of scratch tickets, though they’ve worked hard on their slot machines as well (40 currently available). Licensed by the MGA (Malta’s Gaming Authority), this is an established developer which quickly proved that it has what it takes to get a player’s attention. 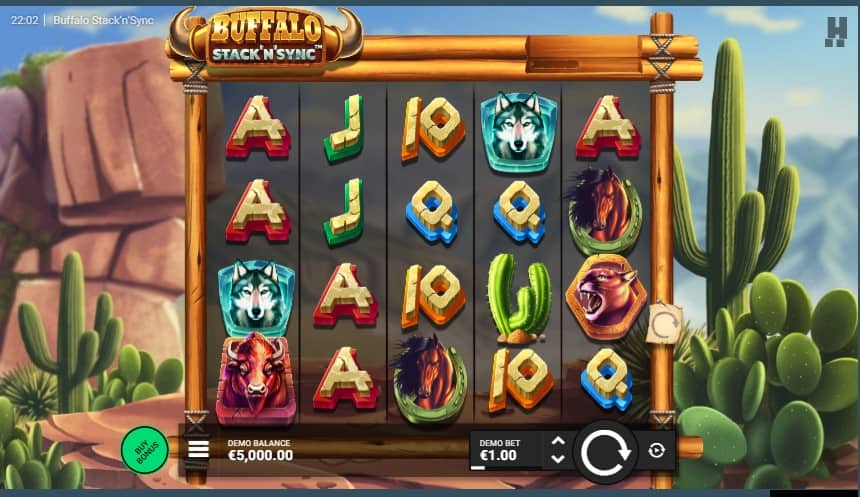 ow To Play It

Use the values chosen by the developer, to decide how much the wager will be worth. The range starts from a minimum of $0.10, and could go up to $100 for a single round’s bet.

As for the type of gameplay that you can expect here, it’s going to be quite volatile, and the 10 active lines spread across 5×4 reels are among the reasons why the game doesn’t pay easily.

Buffalo Stack ‘n’ Sync comes up with several feature symbols, and among them you will find the Cactus Wild. It’s a substitute, obviously, but it can also pay on its own if you get five of them on the same line. The rewards match those paid by the top symbol (20x the stake).

Stack ‘n’ Sync is one of the major features that the game includes, and it requires its own special SNS logo symbols on the reels. It will be used to stack matching symbols on a reel, covering it fully. With the first special symbol that lands, you get a stack of 15 to 60 symbols on its reel.

You also get 1 respin for each special symbol that lands. You try to get more special symbols through them, which will sync those reels with the current stacked reels, so they get the same type of symbols.

The Stampede Reels trigger if you get buffalo symbols to land stacked on an entire reel. The buffalo wins that may form then, will get a multiplier of up to 100x applied to them.

With bonus symbols appearing 3 times, you gain access to 10 free spins. In this mode, the odds of getting Stack ‘n’ Sync symbols to appear will be higher. You also get premium symbols more often.

With 4 bonus symbols present, you’re getting 10 Stampede Spins. It’s a feature that uses only blocker Skulls and buffalo symbols. Skulls can be replaced on the reels with buffalo, if there are Stack symbols that appear on that reel (which will also add 1 extra spin).

I think that the wins of up to 10,000x the stake, promised by Buffalo Stack ‘n’ Sync, are going to prove satisfying for a majority of the players looking into what this slot has to offer.

The mix of high volatility with the 96.38% RTP is one that makes the game approachable, though mostly by the experienced players.

Buffalo Stack ‘n’ Sync looks good, so one can forgive the common theme and symbol choice. It offers a variety of powerful features, unique in their own way, so you have every chance to enjoy it for a long time.