We’ve seen our fair share of Break da Bank slots in the past, but this one is going to be somewhat different. Break Da Bank Again Megaways has the same bank robbery themes as the rest of the slots we’ve seen in the series, but now it’s coming in Megaways form, so you have a lot more symbols to rely on.

What hasn’t changed much, is the overall quality of the design. You’re going to find a rather unimpressive mix of symbols on its reels, ranging from Royals, to images of coins, cash, gold bars, a purple gemstone, and a golden vault door. Surrounding the reels, there are white marble pillars and beautiful lion statues at the top. A horizontal reel, with four extra symbols, is placed at the top of the middle reels.

This is a joint release, from Microgaming and Gameburger Studios. You can only find this slot machine at Microgaming casinos, being an exclusive of theirs. We’ve seen a number of other games designed by Gameburger so far, with titles like Break da Bank Again Respin, 9 Masks of Fire, or Playboy Fortunes, being only some of the options available from them. 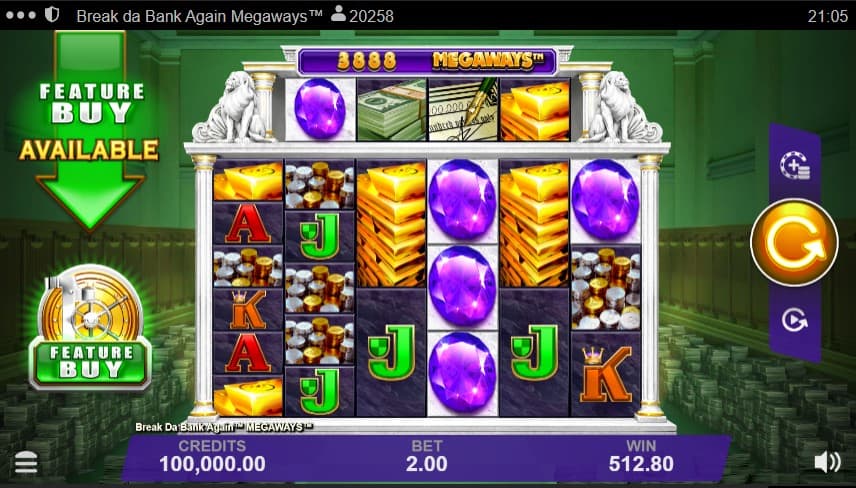 The minimum bet in Break Da Bank Again Megaways will require $0.20 per spin. At the other end, a $20 maximum bet will be allowed.

What you’re looking at, is a classic form of the popular Megaways engine. In this case, we’re getting 6 reels, and each one can have up to 7 symbols on it. The horizontal reel from the top contributes as well with its 4 symbols. As you get a random number of symbols on each reel, the total number of ways to win will vary, and it could be as low as a few hundred, or as many as 117,649 ways. A combo forms with 3+ matching symbols, appearing left to right on adjacent reels.

Once a combo forms, the Rolling Reels trigger, and will remove the winning symbols from the game area. The empty positions are occupied by new symbols, and if new wins form, the Rolls keep coming.

A wild symbol will be present, with a 5x multiplier that can be applied to any wins that it contributes to as a substitute. It’s not going to be a common symbol though, since only the horizontal reel can get it.

Should 3-4 scatters land at the same time, you get 10-15 free spins from them. They’ve added an increasing multiplier, going up by 1x after each trigger of the Rolling Reels. It will not reset between spins, so it goes up for as long as you’re in the free spins mode. More free spins can be won (1-10), if you get 1-4 extra scatters.

There is a small chance, that the free spins will come in the Hot Mode version instead. It’s a random event, which is activated when you have 4 scatters on the reels. The difference is that the starting multiplier is 20x, plus there are 5x multiplier wilds for reels 2-6.

Up to 24,185x the stake can be won while playing Break Da Bank Again Megaways. The game has the usual high potential of a Megaways slot, which is what made them so popular in recent years.

Break Da Bank Again Megaways is one of the more volatile and fun slot machines in this popular series, but don’t expect it to offer great graphics as well, because they haven’t made much of an effort in that direction.

Legend of the Sword