Fishing can be sport for some, and a way to make a living for others. Big Fin Bay appears to combine the two aspects. Even tough it looks like professional fishing, if we go by the fishing boat captain present in its main symbol, there will also be a series of fish turned into trophies. These are the top paying symbols that Big Fin Bay offers, while the six bottom paying ones are with images of Royals (9 to A, each one in another color). Not a bad game overall, going by the design at least, but not quite as modern as other Thunderkick slots we’ve tried over the years.

More than 50 slot machines were released by Thunderkick over the years. Around only since 2012, they’ve proven themselves by releasing excellent slot machines, some of which would include titles like Barber Shop, Birds on a Wire, or Esqueleto Explosivo (1 and 2). 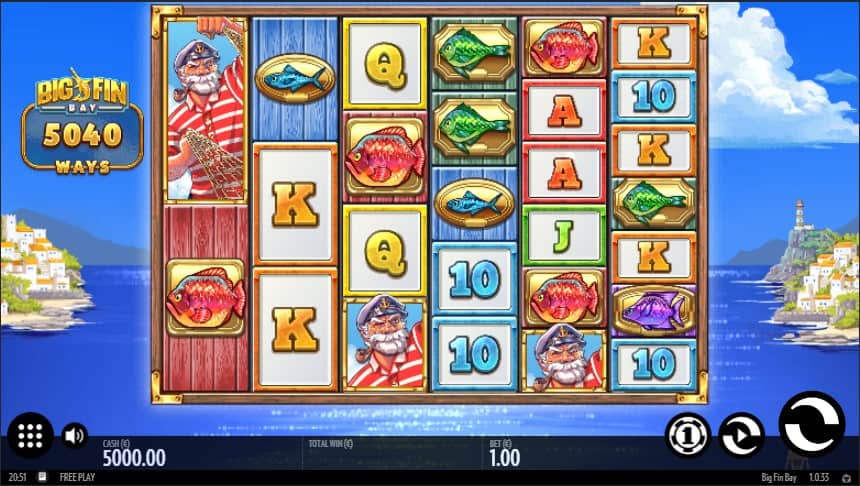 Standard betting rules apply, with a range between $0.10 and $100, which we’ve seen in most Thunderkick slots over the years.

As for the game area, it’s unusual, and it appears to get some inspiration from the Megaways engine, though it’s doing its own thing eventually. You’re playing with 5040 ways to win, using 6 reels where each column will have a different number of symbols (2 to 7 symbols possible). Which ones get each number of symbols, is randomly determined. With wilds expanding the reel to 7 positions, it becomes possible to get up to 117,649 ways active.

A Gold Marlin, used as a wild symbol, is available as a substitute in the game, capable of helping out only when you need help with regular combinations. Should this wild symbol be part of a new win, it will expand and take over the entire reel.

Besides the regular way, you can also get wild reels at random, with help from a Mystery feature. It activates during certain regular spins, at random, and it can transform up to 3 reels.

There is going to be an Anchor symbol which is marked with the Bonus logo, and of course this is going to be the scatter. Have it visible on the reels, at least 3 being required for this, and you get access to free spins. The exact number depends on a random distribution, where each scatter gives you up to 6 free spins.

Free spins are much more interesting as well, and they include respins, which will trigger after rounds where wilds appear. These wilds expand and increase the size of the reel, to 7 symbols. You then get to keep that size for the reel, until the free spins are over, so there is an increase in the number of ways to win. This also brings you 3 more free spins, something that will happen whenever a reel gets to 7 symbols.

I think that you’re going to be more than happy with the payouts that Big Fin Bay will deliver, or at least what it’s capable of giving you. 15,040x the stake is the level that you can reach in a single round, and it’s not difficult at all to believe, since regular wins pay up to 7x, and you have up to 117,649 ways available.

Naturally, that kind of reward couldn’t come your way in a regular slot, so this one will have high volatility. Luckily, it is also mentioned that its RTP is 96.14%.

Big Fin Bay manages to be interesting, using ways to win but also adding their own ideas to the mix. Ultimately, the potential is there, for the game to be a popular one with players.