With a theme that appears to be dedicated to the Northern Lights, which you see in the background image, a lot of the simple design used in Arctic Magic will have a focus on wildlife, when it comes to actual symbols.

You get the game logo with the image of a mountain, a snowflake as a scatter, along with high value symbols which have images of wolves, foxes, bears, reindeer and bunnies. Lastly, some very simple Royals get the low value positions.

It’s a Microgaming title, so it’s coming from one of the more well known developers of slot machines. They have a collection of hundreds of such games, many of them older by now, and by partnering with various independent studios, their collection is expanding rapidly these days. They’re not launching the best games around though, and they have a bit of work to do, if they want to get back their spot at the top of this industry. 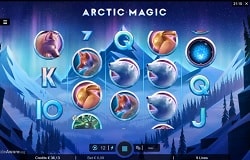 For a game that only needs to cover 9 paylines, the wagers don’t need to be very high, in order to get started. That’s why playing Arctic Magic is possible with as little as $0.09 wagered per spin. On the other hand, there is also the possibility to spend quite a bit more, with the maximum bet reaching $45 per spin, or $5 per line.

Mostly a simple slot machine, with features you expect to see, Arctic Magic will have 5×3 reels & 9 paylines, an older type of setup which doesn’t give you a huge number of opportunities to win.

One of the features which are available here, the Arctic Magic Mountain is going to be the one serving as the wild. Substituting for any regular symbol, but not for other feature triggers, it will also boost payouts of those new wins. It does this with help from its 2x multiplier.

There are going to be free spins as well, with 15 rounds triggered whenever Snowflake scatters appear at least three times anywhere on the five reels. You get paid very well when this happens, with top rewards of 500x the stake being a possibility.

Once you’ve started playing through the free spins, you will discover that all your wins are improved, with a 3x multiplier applying to every single prize that is triggered. There is even a chance to trigger the free spins again, while you’re still inside the feature.

The maximum payouts which are possible in Arctic Magic, of up to 3,333x the stake, can transform that maximum bet of $45 into a jackpot of $150,000. It’s a payout level that I’d typically be happy with, but here I would’ve wanted even more. The reason is that the game is considered Highly volatile, meaning that it will go through your balance quickly, if luck isn’t on your side.

For games like these, you’d typically want a bigger top jackpot, so that you at least get a chance at a big payout in exchange for going through that risk. Ultimately though, with the RTP set at 96.10%, the game is expected to pay back to its players as much as every other modern release you’re likely to see these days.

I appreciated the features of Arctic Magic, and particularly the use of multipliers on several occasions, but this is still an easily forgettable slot machine in terms of graphics and even top payouts, RTP or gameplay. It could be an OK option for some, but it doesn’t stand out, and I wouldn’t call it a top choice overall.