Alice’s Adventures in Wonderland, the hugely popular Lewis Carroll novel, serves as a basis for the latest slot machine from Microgaming and SpinPlay Games. They adapted its title, and so they came up with Alice in WildLand, which actually is just as appropriate for the wonderful and weird world that we’re seeing behind and on the reels. There are two sets of reels here, one on top of the other, with a beautiful green forest behind them.

On its reels, this slot includes a selection of four elegant card suit icons, and then moves on to show off images of toadstools, cupcakes, potions, caterpillar, rabbit, Alice, Cheshire Cat Wild, and Pocket Watch scatter.

It’s a Microgaming exclusive, which was designed by a small independent studio, called SpinPlay Games. Atlantis Rising, the Amazing Link slots, and Blazing Diamonds, are several other slot machines that have come in recent months, from this partnership. 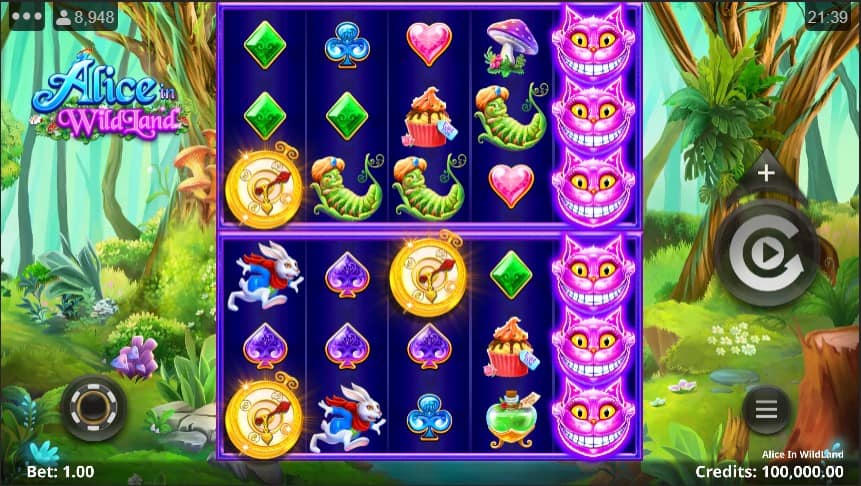 $0.20 to $30, that’s the full betting range that you can work with in Alice in WildLand. You can find the bet options in the bottom left corner, through the Casino Chip button.

It’s an unusual game area, with two sets of 5×3 reels delivering 20 lines each (40 total). There are some things that will influence both sets while you’re playing, but for the most part you’re forming regular combinations, left to right on active lines.

First of all, we have the Cheshire Cat, the game’s wild. Used as a substitute typically, it can also get you paid directly when it forms combinations with other wilds. Up to 5 wilds, when lined-up on a line, will pay up to 5x the stake.

What is really interesting about these, is that they land stacked, and so it’s entirely possible to have wilds active on all lines. Getting a stacked wild which covers an entire reel, will result in a Copycat Wilds feature, where the corresponding reel from the other set gets the same set of wilds on it.

Another big advantage comes from the Cheshire Multipliers. For this, you will need a stacked wild to land and fully cover the same reel on both sets at the same time. 2x to 10x multipliers are applied by these multipliers. You can get several of these in a single round (up to 6 total, with a maximum combined multiplier of 60x), but there is also a chance that they trigger at random, and in that case you only get one.

Through 3 to 6 scatter symbols, with the Pocket Watch, you can get 10 to 50 free spins from this game. Stacked wilds are nudged at this point, and they end up taking over the entire reel they land on. This way, you’re guaranteed the Copycat Wild mechanic, after they’re all nudged into place. The same goes for the Cheshire Multiplier, where it’s enough if you get the stacked wilds partially visible on corresponding reels.

Alice in WildLand has decent potential, paying as much as 12,000x the stake in a single round. It’s not surprising, if you look at the multipliers that can get applied by its wilds (up to 60x total). I wouldn’t worry too much about its volatility either, it’s a medium-high in this case, which is pretty good for a slot machine with above average rewards. Long-term, it’s expected to have a Return to Player of 96.33%.

While there are a lot of games that use a similar theme to this one, I like how it was implemented by SpinPlay Games and Microgaming. Alice in WildLand has an interesting mix of features and mechanics, which make it a good pick for any player.