Wheel of Fortune On Tour takes you on a joyride across the great US, down route 66, past the Statue of Liberty and all the way to the glitz and glamour of Hollywood.

This is one joyride you don’t want to miss, so hop on the Wheelmobile bus the instance you see this yellow multi passenger limo park on the reels of Wheel of Fortune On Tour. You won’t regret it one bit as you will have a chance to roam thorough Americas open roads and win great prizes along the way.

As in the original TV show, your profits will depend on your luck as you Spin the Wheel of Fortune, with the audience there to cheer for you in the background. With the combination of decent animations and vintage TV show symbols, Wheel of Fortune On Tour is one slot game that will keep you entertained for long sessions at a time.

The designers behind the Wheel of Fortune TV show tribute slot are IGT. No need to explain who this provider is, as they already have a great reputation in the online gambling community and are one of the leading software providers in the world.

Their games are fun to play, original in design and bonus features, which is reason enough for many players to make the IGT slots their top choice games in many online casinos. 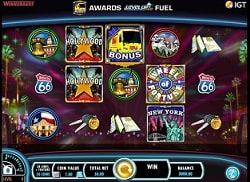 For this slot the designers at IGT decided to go with 30 active pay lines, 5 reels and 3 rows. But there is an extra fixed cost of 20 coins per spin, which are used to power up the bonus features.

With this, the bet levels on Wheel of Fortune On Tour go from the $0.50 minimum up to the $500 maximum bet per spin.

The first thing you need to understand about this slot is the fact that Wheel of Fortune On Tour is a progressive multilevel game. This means that the bonus features are unlocked one at a time with each level passed. The levels in the game are unlocked as you spin the reels and collect bonus symbols, which in return fill up one space on the tank meter.

As soon as 10 bonus symbols are collected one game level is unlocked, bringing you one step closer to a new bonus feature. Now when 3 bonus symbols land on reels 1, 3 and 5 the Spin The Wheel Bonus is triggered. As the name suggests in this bonus you need to spin the wheel and you will be awarded with the corresponding prize on which the arrow lands.

Each of these unlocked features can award great payouts if you manage to trigger it in the Spin the Wheel Bonus game, so get ready for long sessions if you decide to play this game to the end.

There is also a random base play feature called the Wheelmobile Wilds feature which can award wild symbols on the reels. The number of wilds can be very big as anywhere from 1-4 random symbols can be chosen to become wilds, on each space they land on the reels.

Wheel of Fortune On Tour can award great payouts in almost every feature of the game. The Wheelmobile Wilds feature can award payouts up to 2,500 x total bet, while the highest win in the Spin the Wheel bonus is 600 x total bet.

IGT managed to create another great video slot game which perfectly fits their slots design style and diversity in bonus features. The progressive, multilevel game play makes Wheel of Fortune On Tour very fun and addictive to play, as each unlocked level brings you one step closer to unlocking extra bonus features.

Unlocking the last feature can take a long time to happen, but the real fun starts after every bonus feature is unlocked and you have more chances in winning big.

With so many bonus features to be won Wheel of Fortune On Tour is sure to keep you spinning the reels for many hours, with each spin bringing you closer to a big win on the reels.