True Grit Redemption gives us a type of Wild West style design that Nolimit City seems to specialize in. It’s not the pretty Wild West design that you might expect, but a rugged and dangerous place, with the action set in the middle of winter.

As symbols, it has five Royals (10 to Ace), along with five characters that will pay more. Wilds and scatters will also show up.

An impressive developer, Nolimit City has created over 50 slot machines for its players, and we’ve seen several of them feature a somewhat related Wild West style design. Tombstone RIP is another recent release, along with older games like Deadwood or El Paso Gunfight. 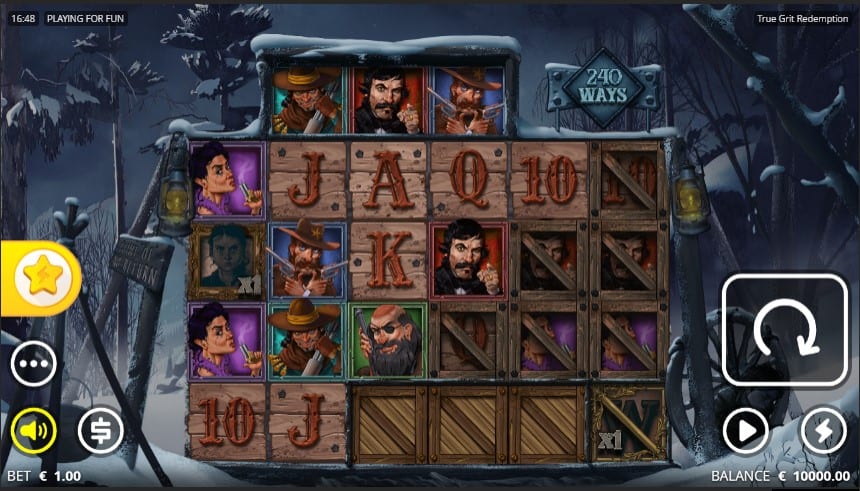 True Grit Redemption uses 6 reels, which have 240 or more ways to win (symbols can be unlocked to boost the game area). You have certain symbols which will land at the top (wilds and characters), while the main game area can get most types, but not characters. There is also a locked row at the bottom, with special symbols and characters. Unlocking new symbols is possible with the help of scatters.

Forming winning combinations results in cascades triggering, so there is a chance that those wins will keep coming. Winning symbols get removed, and the new symbols landing in empty locations can continue bringing prizes.

Grit Girl is one of the interesting symbols, which will land on the first four reels, and it offers rewards of up to 500x. A multiplier, shown on the last reel in the bottom position, will apply to it.

A fairly long list of special features are available in this game:

xWild Transform, which will turn symbols into wilds, if they are present on the top row and also on the same column underneath it.

Xnudge Wilds means that the stacked symbol will be nudged to cover the full reel, if it lands on the reel at the bottom. A boost to the multiplier of 1x is added for each move it makes. If they don’t pay you, then they stick around to be used in another cascade, which means that the multiplier gets another chance to increase.

You can use an xWays system as well, to boost the game area, by turning individual symbols into up to 3 new ones. This gets you more ways to win as well. An Infectious variant is also present, which expands all symbols of that type.

Symbols with Reel Split will show on on the reel at the bottom, and they’re used to double the symbols from above. It can happen twice.

Another bottom reel symbol is Transform Em, which gives you a single low symbol type, in place of all others of similar value.

Via 1-4 scatters, you can get 4 to 10 positions unlocked, for more symbols. With 3 scatters, you also get 8 Torture Free Spins. You use all unlocked positions in this mode.

The presence of 4 scatters gets you 10 Dead Spins instead, with unlocked sticky multiplier wild from the 5th reel. After each triggered cascade, you get a 1x boost to the multiplier.

True Grit Redemption pays well enough, up to 20,220x the stake, and it will be highly volatile, so it’s not the type of slot machine that everyone should try out. Those willing to take the risk, should rest assured that the RTP is at 96.11%, so while huge swings in fortune can be expected, this is a fair game.

Overall, I’ve found True Grit Redemption to be an impressive new slot machine, which is not at all unusual for a developer like Nolimit City. Lots of great features, big rewards, extreme volatility, these tend to be the norm with them.