We don’t usually look at graphics as the defining trait of a slot. But sometimes, they’re impossible to ignore! And that’s certainly the case with The Wolf’s Bane, NetEnt’s latest venture into werewolf horror. The gorgeous but gloomy atmosphere weighs heavily on the town. Who will the full moon reveal as a horrific beast? And will the hunter be able to kill them before they end the village?

The background image is what truly sells this game. The tavern is the only place where the lights are on, as the villagers huddle inside for safety. Outside, we can see the massive full moon hanging high in the sky. We can see how the wind makes the dead trees shift about. And carried by that same wind are powerful howls that will make your blood freeze in your veins!

The Wolf’s Bane has two special features. The first is a rather simple pick-and-click bonus, that can award cash prizes. Second, and far more lucrative are free spins, during which one of four Wilds will be selected. It will randomly appear as an overlay Wild on reels one, two and three on every free spin.

NetEnt is one developer that needs no introduction. They are hands down the biggest software provider when it comes to slots. And it’s quite easy to see why! Almost all of their games look gorgeous, and feel distinct from each other. And while even the mighty iGaming giant stumbles sometimes, they more than make up for it with all their innovative releases. We can’t wait to see what NetEnt has in store for the future! 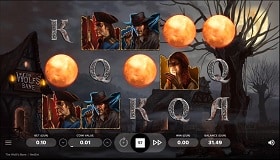 You play The Wolf’s Bane on a 5×3 board with 10 fixed paylines, which pay left to right only. Players cannot turn individual paylines on or off. Instead, they set their total bet by changing the coin value, which adjusts the total bet, in turn. Gamblers can wager between $0.10 and $100 on each spin.

We’ve seen NetEnt experiment with their new user interface, and it makes an appearance again in this slot! The biggest change is that setting your wager has been simplified somewhat. That said, we really don’t like how the total bet is a miniscule number beneath the coins bet. NetEnt needs to increase its size, because right now, it looks like they’re trying to keep your attention away from it.

Autoplay in games made by this developer have always been good. The Wolf’s Bane is no exception! First, you select the number of auto spins, and then you choose additional conditions by opening the advanced setting menu. Here, you can set a single win cap, or a win and loss limit. You can also set the slot to stop spinning on either special feature, or even to stop autoplay on any win at all.

Symbol design is absolutely stellar in this game.  The werewolves actually look like the creepy creatures they’re supposed to be! Seeing them stand upright, a monstrous combination of human and beast? It truly sends a shiver down your spine. The villager icons also look ragged and worn, like they’re barely surviving with all these werewolves out to get them. Great work, NetEnt!

Collect three Bonus symbols in the first, third and fifth reel to win the Pick and Click special feature. Click one of the hunter icons, and you’ll receive a cash prize worth between 5x and 50x your bet.

Find three, four or five Scatters on the board to win ten, twenty or thirty free spins, respectively. The background turns blood-red, and you can see werewolves roaming the village now! Before free spins are played, the slot will randomly pick one of four Wilds to act as an overlay Wild. These overlay Wilds appear randomly on the first three reels. The Wilds that can appear are:

This low to medium variance game has a jackpot worth 500x. The Wolf’s Bane has an RTP of 96.74%, which is above the current industry average.

We don’t think there’s a need to praise the graphics here. We’ve done that enough in the rest of the review! Special features are all things we’ve seen before from NetEnt. They’re executed well, but the low maximum win will stop this from being a player favourite. It’s good for casual play and grinding your wagering requirements, but it lacks that oomph to truly stand as on its own two feet.