Quickspin upgraded this game, but the graphics didn’t benefit much from their attention. Sevens High Ultra is a game that uses the same symbols and reels as the original version, but with different backgrounds. It’s still a classic theme wise, using a lot of fruits and other similar icons.

It starts from the low paying fruits, showing the plum, lime, orange, and cherries. From this point on, we’re looking at symbols which pay differently (classic vs ultra), and this includes the paytable values for the Silver Star, Golden Bell, Red Seven, Green Seven, Blue Seven, and all the wilds that are included (regular and Seven themed versions).

Coming from a company that has launched a lot of great slots over the years, called Quickspin, it should be mentioned that this classic fruit theme is rare for them. Typically, you can expect unique themes in most games they release, and I’d mention here titles like Ivan and the Immortal King, Artemis vs Medusa, or Sakura Fortune, if I’d have to pick some of the more popular ones. 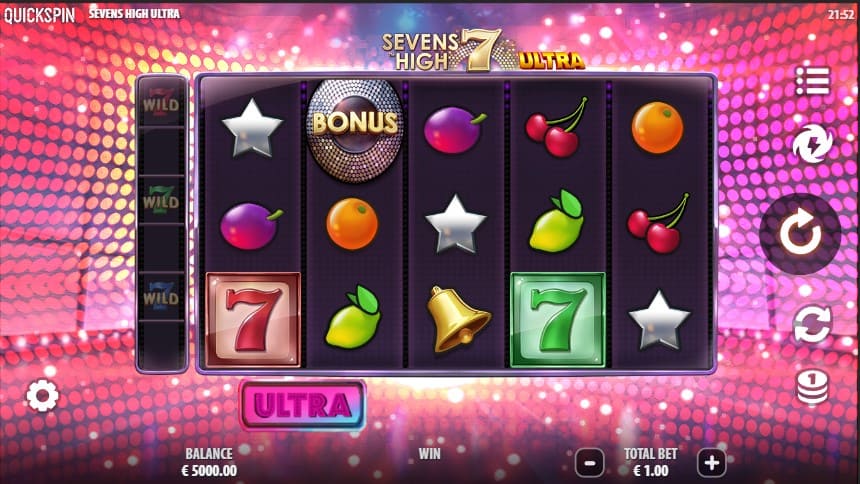 $0.25 to $100 is going to be the complete betting range available to players, in Sevens High Ultra.

What the game gives you in exchange, is 5×3 reels & 25 active lines. While you get two versions of the game to choose from, the difference is mostly in the amount being paid by combinations, and the change in volatility. The mechanics are the same otherwise.

The Respin feature triggers after any winning combination. It will add to the Wild Meter, and as the respins trigger and continue (through additional wins), you start transforming the regular premium Sevens into Seven Wilds. Every 2 wins will transform one of the three Sevens. The game area resets at the end of the spin.

Get the Bonus Glitter Balls on the reels, to trigger the free spins. While in the Classic mode you get only 10 spins, the Ultra version will give you 10 to 35 spins, in exchange for 3 to 5 scatters. Rewards of up to 500x the stake are also paid in this mode by those scatters, another plus in its favor.

You transform Sevens into extra wilds here as well, following every 2 winning combinations formed. This also adds 2 more spins to the total.

As for what those wilds can do for you, expect them to form winning combinations which pay much more than regular symbols, though it’s more common to get them as replacements on the reels.

The potential of the slot more than doubled for the Ultra version, but there are some costs associated with that increase. While you can get up to 5,300x the stake now, this is a highly volatile slot in its Ultra version, with a lower RTP at 96.06%. By comparison, the Classic version is less risky overall, and it comes with a 96.54% RTP.

Sevens High Ultra should work well if you enjoy highly volatile slots, but there is definitely room for improvement. Little has changed compared with the original, and the rewards aren’t quite as high as I wanted them to be, considering the drop in RTP and increase in volatility.