Book-style slot machines with a theme inspired by Ancient Egypt, that’s the sort of thing that Play n GO loves to deliver. They’ve already done it across many of their games, and they even have entire series that use similar mechanics. Luckily, while the theme is rarely changed, being always connected to Egypt in some way, the graphics are also above average quality-wise. The halls of some ancient temple can be seen behind the reels, with piles of gold coins sitting on the floors.

A total of 10 symbols are used, starting off with the 10-A Royals, and then with snakes, scarabs, Bastet, Shai (top symbol), and the Ankh Wild/Scatter.

Play n GO, the creator of Secret of Dead, has a huge collection of slot machines that use similar Book-style mechanics, some with unique angles, others not so much. If you’re a fan of this type of game, then their collection is one that you should look into. 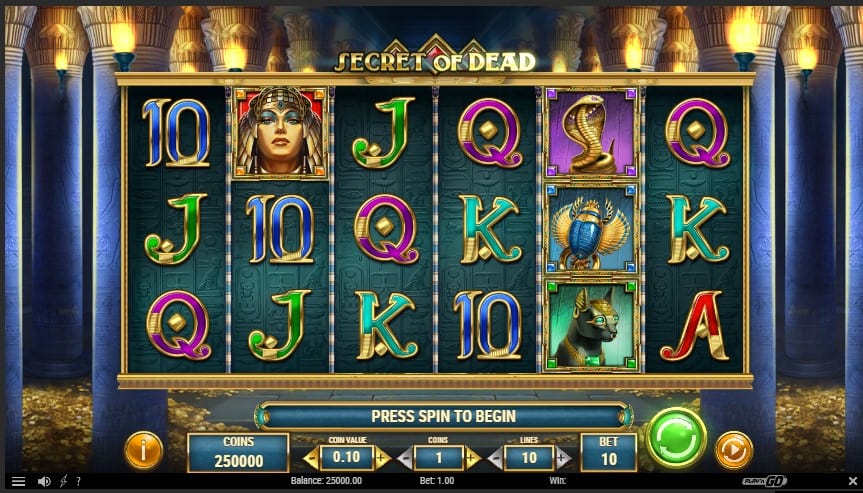 Secret of Dead comes with several options where you can change the amount you’re about to spend. You have 10 active lines, and as you change the coins and denominations used for their bets, you could spend between $0.10 and $100 each spin.

There are 6×3 reels present in Secret of Dead, so this is already an interesting option for the Book category (typically with 5 reels used). The number of lines is typical for this sort of slot, 10 of them being present.

Secret of Dead is a fairly typical Book slot machine for the most part, but there are things to set it apart as well. I’d mention the presence of the 6th reel in particular, since this allows it to pay more, but it also makes it more difficult for a top paying combo to form.

The features are going to use the same mixed wild/scatter symbol, which in this case takes the form of the Ankh. As a wild, this symbol will be used to substitute for others, and will allow new winning combinations to form. It’s not a common symbol though, since it’s also a scatter, and it only lands once per reel.

Having 3 to 6 Ankh scattered across the reels will bring you both access to free spins, and a prize between 1x and 250x the stake. To retrigger the free spins, you will need another 3+ Ankh scatters to land.

You start off with a single expanding symbol, which is randomly selected by the game. It allows one of the regular symbols to expand and take over the reels it lands on, so it can form winning combinations on all active lines. If the free spins are retriggered, an additional expanding symbol is chosen. You could have all 9 of them become special, eventually.

Of special note here, is the symbol with Shai, the queen. She will pay twice as much when it forms combinations, if she’s the special symbol.

Play n Go doesn’t shy away from big prizes, and Secret of Dead manages to do a better job in this department than quite a few others. 10,000x the stake is the biggest return that one can expect from this slot.

There will be an entire range for RTP values, and the highest one is 96.20%. At that level, the slot is worth checking out.

Secret of Dead is a decent addition to the Book category, and its only major advantage is the use of 6 reels instead of 5, along with the increased prizes available when the top symbol is chosen for the free spins special position.