Samba Carnival, is set among the feather cladded street performers of Carnival. It aims to capture the spirit, that parades down the streets of Rio. It is a yearly tradition, of sanctioned partying. That stands for letting, it all go, and having a good time.

This is because the games they have released have stood out. That is not to say, they have not gotten a few wrong, because there have been some shockers. However, the name Play ‘N Go is still associated with a good game. 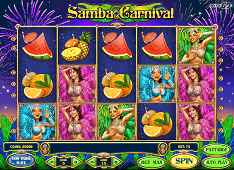 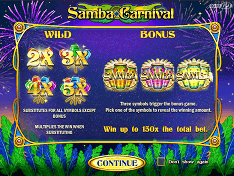 Samba Carnival is a five-reel slot. They were going for an energetic design, and in some respects, it has worked. The fireworks, exploding in the night sky over the performer’s feathers looks great.

The reels are alive with animation. But Play ‘N Go, must have, run out of ideas when it came to designing the panel, which is a disorganised cluster of circle buttons. The design is good, but it is not great. Play ‘N Go has animated all the girls, to giggle and bonce, which can only be a good thing. The feathered performers are the high valued symbols, and the low value symbols are tropical fruit.

The player, places a bet before spinning the reels, to have it take effect when they are next spun. If the player would like more information about paylines, and symbol values, clicking the Info Button will bring up the paytables, and game rules.

Samba Carnival has multiplying wilds. They increase the value of winning paylines, in which they are included. The multiplication shown on the symbol is applied to the win. The multipliers range from 2x to 5x and because they are wild, will substitute any symbol in the game. This makes for a great feature.

If the player lands three Bongo Drum Symbols, anywhere on the reels, they will trigger a pick and choose bonus game. The player selects from the three bongo drums. There are winnable values under them, of 150x stake.

Samba Carnival, has some big winning potential. The highest five in a row win is worth an impressive 2,500 coins. There are multiplying wilds in the base game. This means that larger wins, then the traditional five in a row jackpot are possible.

Samba Carnival is a great addition to the titles of Play ‘N Go. They did not nail the design, but it is still a quality title. There is big winning potential in this one, with the multiplying wilds. In addition, the pick and choose bonus game, breaks up game play. Players will find this an enjoyable title and consequently enjoy playing it.