iSoftBet’s latest slot machine was recently redesigned as a Christmas themed slot. However, that game was only available to play for a limited time (a few weeks at most), and the game has since reverted to its normal design.

Don’t worry, though, we’re sure iSoftBet will bring back its Christmas trappings when December nears again. However, the original slot machine has proven itself more than enjoyable since its launch.

Robo Smash is, of course, a robotic themed slot, and one which centres itself on cute and cuddly machines, with human-like qualities.

We’ve seen this kind of thing before, but it never gets old. Is this 5-reel, 15-line slot machine any good, though? Let’s find out… 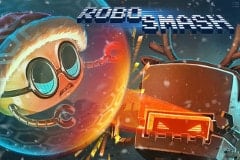 Robo Smash offers up a simple design. There aren’t too many paylines for you to bet on, and you cannot adjust what is there. Robo Smash does allow you to alter your coin values via its wagering menu, though.

Players can select coin values which stem from a floor of $0.01 up to $3.00 in all, and that will see you end up wagering anything from $0.15 per spin, up to $15.00 per spin in total. That’s not bad going for a nice and simple little video slot such as this.

Wild symbols: Wild symbols appear as a purple robot. These symbols can replace all any others in the game without exception. They appear as single-spot symbols and have no cash prizes of their own to offer you.

These can seriously help to boost your wins. When both robots appear on the first and fifth reels they will act as stacked wilds, players will then trigger a free spins feature.

On the third spin, stacked wilds will appear on the third reel, and all other reels will spin, with all winnings being tripled.

The best paying prize in this slot machine game is 500 coins. It is paid out when players land 5 of the green robo characters on any payline in the game.

That is a modest cash prize, but to be honest, with wagers costing as little as they do, who is going to grumble at such a petite non-progressive jackpot prize.

Robo Smash has proven itself to be a smash hit thus far. Its Christmas edition drew a lot of attention to the game – as did the fact that it was only available for a limited time only.

The way that iSoftBet have chosen to mix up their free spins bonus round is ingenious and gives you the chance to pocket wins with what feels like a handful of different features, even though, in reality, it is the same feature, albeit modified on each spin. What’s not to like?