The Vikings have been one of the more fun sources of inspiration for online games, and I’d include slots here as well. Riches of Midgard: Land and Expand is just one of many to do this, and to use high end graphics at the same time. With cartoon-style graphics of the highest quality, the game presents us with a mix of Royals in its less valuable symbols, and with three Viking gods from Midgard at the top (Odin, Thor, Freya), and with drinking horns and meat following.

Riches of Midgard: Land and Expand comes from NetEnt, a company which has been at the top of the online gaming industry for a long time now. It’s been established more than two decades ago, and they currently have more than 200 slot machines in their collection. Riches of Midgard is actually a pretty good example of what they can offer, especially in terms of design quality and special features. 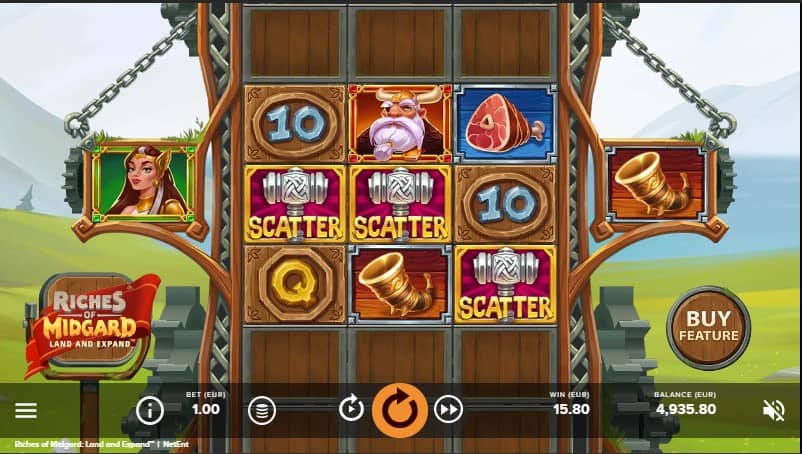 A long list of bet values are available, once you click on the icon with the stacked coins, and reach the Bet screen. The range for them is between $0.10 and $200.

Riches of Midgard has only 9 active lines on 3×3 reels, but the game area may expand during free spins and respins, and eventually you could end up with 3×7 reels and 29 lines.

A major part of the game is going to come via its Hot Spot Reels, which are single symbols appearing to the left and right of the game area. These spin at the same time, but their symbols are not included in wins. What you need, is for the symbols shown in the Hot Spots to match, while you also get them on 2 or 3 regular reels. This grants you access to a Re-Spin feature.

This Re-Spin, will have the triggering symbols expand and take over their reels, after which a re-spin follows.

Getting access to 8 free spins is done when you get three scatters with the image of Thor’s Hammer, on three reels. Landing a scatter on reel 3, will give you additional symbol positions at the bottom and top of the game area, and will also add 2 extra free spins. The expansion of the game area increases the number of active lines as well, and you can have up to 29 eventually.

One thing which makes it have more potential, is also the presence of a Wild symbol, which may show up on the Hot Spot from the left side.

There is fairly limited payout potential in Riches of Midgard, so that would make it one of the slot machines that NetEnt has designed for the casual player. With its low-medium volatility, this game offers rewards of up to 435x the stake, which will be considered low by most.

One other thing to take into account, is the long-term RTP, which tells us how much money will the average player walk away with, when he plays this slot. A 96.03% figure is fine for a slot machine, it’s about average for the online industry.

Riches of Midgard delivers an excellent mix of features, particularly for a slot which has only 3 reels. It has superb graphics, the game area can expand, and the features feel unique, so there are plenty of pros to consider. On the other hand, it’s also a game with fairly low top prizes, which was made accessible even to casual players, so those that want a bigger jackpot as a target might not be satisfied.