Puebla Parade, a new release from Play n GO, is one of several party-themed slots that we’ve seen from developers already. It appears to be popular among them, and players likely enjoy it as well. Mexican parties incorporate a lot of good music, delicious foods, pinatas, and sometimes an abundance of very well decorated skulls. This slot machine blends all those elements together, and we see them in the symbols, and in the decorated streets of a town from the background image.

The 9 to A Royals will be there, paying less than the others, but even they look festive thanks to the colorful paper used in their construction. Five premium symbols are next, with the dip bowl, tortilla, guitar, skull mask, and a pinata. Senor, Senorita, and Pareja Wilds, are going to be present as well, though not as often.

If you enjoyed Puebla Parade, then I’d definitely recommend the rest of Play n GO’s collection of slot machines. This is a big developer, with lots of resources, and they use them to create a lot of new slots every year. The quality of the design and features, as well as the payouts made possible in them, are almost always above average. 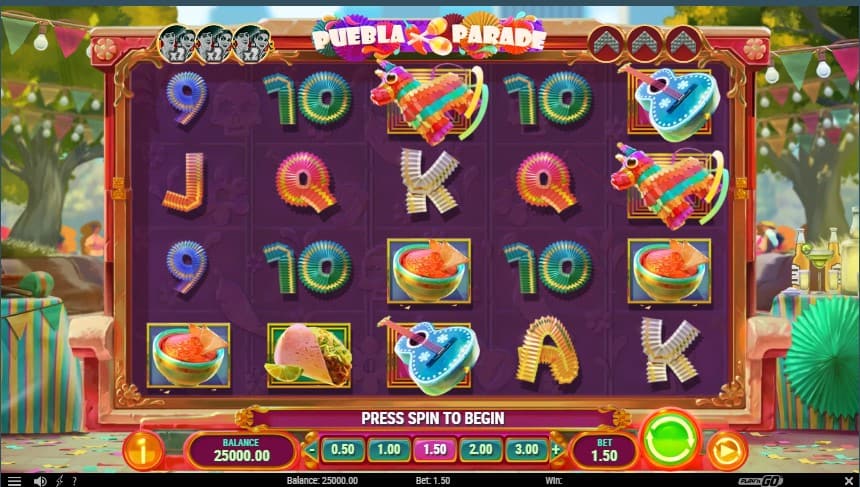 The wagers that you can select start even lower than in other slots, with the minimum being worth only $0.05. Bets of up to $100 are possible as well though.

The 5×4 reels of Puebla Parade use the Connecting Paylines system. You get a total of 421 possible combinations when the game area expands fully (5×7 reels at most), where symbols have to be next to each other, either horizontally or diagonally.

There are three types of wilds in total, with the Senor and Senorita Wilds being the two that make the third one possible. You need the two to land at the same time on the reels, at least once, in order to give you 2 respins. Sticky wilds are used inside, and they will be used as replacements for all symbols.

The wilds involved will merge into a Pareja Wild with a 2x multiplier, if they can. Pareja Wilds will also give the game area a boost, adding 1 row, while also resetting the number of remaining respins.

Do this a couple of times, and you can get the game area to be up to 7 rows high.

The free spins trigger when you manage to have 3 Pareja Wilds formed, so it takes a successful series of respins in order to get to this stage.

You win 8 Bailar free spins, where the Pareja Wilds will apply 3x multipliers to wins. These are acting as walking wilds, which remain on the reels, but in different positions each time.

Like a lot of other slot machines that we’ve seen from Play n GO over the years, this one also pays up to 5,000x the stake, an amount that I’d consider low these days, especially since it’s also advertised as highly volatile.

A 96.20% RTP is advertised for the highest level of the range, but there will be many casinos that use lower settings, so I’d watch out for this.

Puebla Parade looks about as good as any other Play n GO slots, comes with a unique set of features, and it’s just a fun option overall. You don’t get the same heart-stopping top jackpots as in other highly volatile slots, but it can be OK even so, if the RTP is high enough.