Racing through the streets of a major city, that’s the feeling that Night Trax will give its players, and there is a futuristic style that they went for. It’s evident mostly because of the use of neon-style icons, the surrounding graphics, and in the holographic quality of the background.

If you’re expecting racing themed icons here though, you will be heavily disappointed. The entire list of symbols is comprised of arrows, pointing in different directions, that you need to line-up just right, to get paid. It’s unique, I will give it that, but that doesn’t make it fun to look at.

Its developer is ELK Studios, a company with plenty of experience, that has a certain way of doing things. I’ve found a lot of good-looking slots in their collection, plenty of fun special features, and a betting system that looks the same in every single game they release (includes betting strategies, where the wager changes automatically, depending on various parameters). A couple of notable games from their collection would include Bloopers, Taco Brothers, and The Lab. 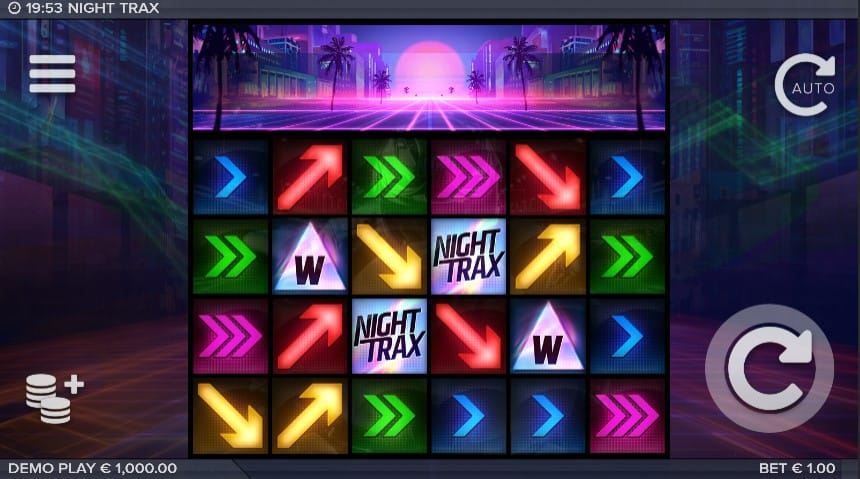 The standard betting range of all ELK slots applies. You have 100 coins in any wager you place, and the total value is going to be between $0.20 and $100.

You will be playing on 6×4 reels, that get 72 bet ways. As I previously mentioned, you are using arrow-shaped symbols, that need to connect in the right direction. It’s possible to get a line to split into two directions, if the right arrows land.

Forming winning combinations is already interesting, thanks to the mechanic that Night Trax implemented.

It gets even better though, as respins are guaranteed whenever a combination is formed. The Trax Respins will trigger and will try to add additional symbols to the current combos, or to create new ones if possible.

There is also that combo split that can happen, with arrows going in two different directions from a common point. This is going to bring a random multiplier for the wins that are formed there, and the boost can be anywhere between 2x and 32x.

They didn’t forget about the wild symbol, it’s one of the top paying options (25x the stake for a full line covered by wilds), but it’s also a substitute and it can help out with the formation of any of the regular combinations.

As for the game’s respins, those come when you have three scatter symbols on the reels. It should be a familiar feature, as we’ve seen these respins in a number of games already. It has its own flavor in Night Trax though.

You’re getting 3 respins, where the triggering bonus symbols are turned into multipliers, and then become sticky. You can get additional multipliers, arrows, or blank positions. Whenever multipliers appear, the respins reset back to the original 3. The arrows are going to be used to upgrade the multiplier symbols by connecting them (this also turns the arrow into a multiplier).

At the end of the feature, you will get paid, using all the visible multipliers, together with the round’s bet.

In terms of potential, Night Trax doesn’t look bad, being capable of paying 10,000x the stake in a single spin. The downside would be the 95% RTP that was mentioned for it, especially for a high volatility game.

Night Trax is no common slot machine, and you will enjoy it for that alone, its unique mechanics and features. On the other hand, I didn’t love the complement of arrows that show up on its reels, nor the 95% RTP that’s advertised for it.