The original Moon princess was a much tamer option than the Christmas Kingdom version. While a lot of other developers might’ve went with a simple redesign, good enough for a holiday slot, Moon Princess Christmas Kingdom also changed the layout and the way the game plays. It’s still an Anime style design, but the princess symbols are now dressed better, and there is plenty of snow and Christmas decorations around the reels and on them.

First, I’d mention the three princesses, called Love, Star, and Storm, used as premium symbols. The low paying ones show us a Bell, Heart, Star, and Bauble. Several others are reserved for the feature symbols.

Over 200 slot machines released, and dozens of new ones announced for 2022 as well, that’s the kind of developer Play n GO is. What’s surprising, is that they go for both quantity and quality, even as some aspects of their games tend to look alike. That doesn’t happen for their features though, and I appreciate it. 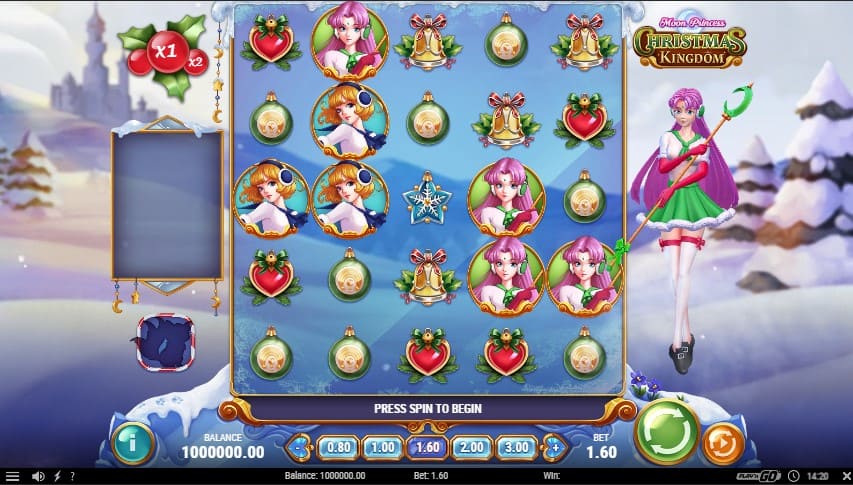 Once you’ve selected your bet, you can get the game going. A minimum wager of $0.20 can be used, and a maximum one of $100 can also be selected.

Described by some as a Cluster Pay system, the winning combinations of Moon Princess Christmas Kingdom are actually not quite easy to pin down. To get you paid, it just requires for 3 to 5 symbols of the same type, to be next to each other. It doesn’t matter if they line up horizontally or vertically, as long as they’re on the same row or column.

As a combo is formed, the symbols involved are cleared. They’re not replaced with anything, so your aim is to clear the entire grid, getting a bonus prize when you manage it.

The Moon symbol will be the slot’s wild, useful when it can act as a substitute. It needs to appear next to enough matching symbols, so that they can form a new combo together.

Another interesting mechanic, is the one with the Mistletoe positions. These show up behind the regular symbols. You need to form a combo through a Mistletoe position, to boost the multiplier by 1x. There are twice as many of these special spots on the reels, during free spins.

Losing spins don’t need to remain that way. A random feature can bring on the power of the currently visible Girl, and a special modifier. Love will convert one type of symbol, Star will add up to 2 wilds, while Storm will take away two types of symbols.

The image of the Arctic Fox is going to be used as a way into the Trinity feature, acting as scatter. You only need one scatter symbol for this. A single free spin follows, with the three girls all using their powers at the same time.

Clearing the entire grid during the Trinity round, will lead to the free spins. Here, you have your pick between:

The free spins also come with twice as many Mistletoe locations, and guaranteed Girl Powers for all losing spins. If there was a multiplier in the starting spin, it carries over.

The payouts have been improved in this game, so Moon Princess Christmas Kingdom can pay up to 15,000x the stake (compared with 5,000x in the original title). It’s more volatile as well (medium-high), while the RTP can go up to 96.20%.

Moon Princess Christmas Kingdom delivers a unique set of special features, and it’s even more powerful than the original was. Not as friendly towards casual players perhaps, but it’s the kind of slot that can deliver huge prizes now.