Mega Boy is a new game from iSoftBet which will take you down memory lane. Think of your favorite Nintendo game in the 80s during the golden era of 16-bit video gaming.

The reels are full of delightfully pixelated symbols including hearts, stars, cherries and standard card symbols. The new release also offers synthesized sounds that suit the theme perfectly. This is retro gaming at its best if you’re into that kind of thing.

iSoftBet is an established online casino software supplier that offers more than 400 titles. The company is known to create outstandingly flexible yet powerful services and impeccable gaming solutions.

iSoftBet doesn’t just provide excellent games and technologies but they also offer comprehensive tools for management and refined ePayment integration. They offer their services in markets that are regulated and are certified in Belgium, Malta and Italy. 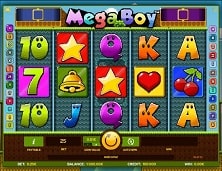 When you look at this online slot game, you will come across the common five-reel, three-row format which is very commonly used throughout the industry. It has 25 paylines which is among the most popular layouts but it suits the game very well.

The coins are priced between $0.01 and $0.20 so the bet for every spin will be $0.25 to $5 depending on how many of the paylines are locked in. There is really nothing very interesting about the design of the game, except the retro feel.

The gameplay for Mega Boy is very simple, offering the standard features that are expected from modern slot games. You can activate as many of the 25 paylines as you like, by clicking on the colorful side tabs that line the reels on either side.

The other commands can be found at the lower part of the game screen. There are different switches for setting the coin value and choosing the amount to wager. When you are done, just hit the central button to set off the reels.

The corresponding cash prize is won by landing certain winning combinations of symbols on activated paylines. Wins are automatically added to your total credit. There is also an Autospin feature, which spins the reels continuously as long as you like with a set wager, enabling you to enjoy the graphics.

Two special game modes can be triggered by the appearance of one of the two special characters, when they appear, on the third reel. The characters will stay for 10 spins with electrifying wild features. Each mode will bring specific power-ups like multipliers, wild transformations and expanding wilds. Furthermore, all the icons (except the special characters) can be replaced by the wild symptoms that are available in the game. This can result in exciting winning combinations that can increase your winnings.

The goofy ram character offers these features:  double the multipliers on each win, wilds that copy both vertically and horizontally in a specific position, expanding wilds that can cover an entire reel or all symbols of a particular type becoming wild.

For the character with a purple hat, the player will get one of these features: triple the multipliers on each win, wilds that have the ability to copy themselves on a specific spot diagonally, wilds that can copy themselves horizontally or other symbols that are random turning wild. This is a pretty interesting way to offer a special feature in an online slot. It makes the game a lot more exciting.

All in all, this is another good game from iSoftBet but other than its retro vibe, there is nothing really special here. If you’re a fan of the online casino software supplier, there’s a good chance you will like this game. It is worth a try but you will most likely get bored and move on to another game in a few hours. Also, the bets ($0.25 to $5) per spin won’t work for ultra-high stakes players.