Unlike their main competitor, Marvel, DC comics has moved beyond being exclusive to only one software provider, so we can see many similar games based on a DC comic book by many providers in the industry.

For those of you that don’t know, Justice League was a comic book released in 1960 and has become one of the most popular comic book ever since.

The main characters of the game are seven of the best world super heroes (Batman, Superman, Flash, Aqua Man, Cyborg, Green Lantern, Wonder Woman and Flash) on a mission to protect Metropolis City from any villain that tries to destroy it.

The original symbols in the game have excellent details accompanied by equally great animations. Justice League is a new video slot game which will capture the hearts of every comic book fan across the online gambling community and beyond. 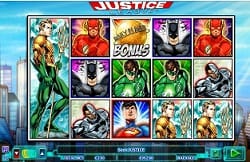 It’s great to see a shift in their choice of slot themes and we hope the number of DC comic slots by NextGen will increase substantially in the future.

Justice League is designed as a 25 pay line slot, with the traditional 5 reels and 3 rows. This means that players will be able to place wagers of $0.25 to $125 per spin, making Justice League accessible to all levels of players. The bet is adjusted by using the total bet button and the pay line number can’t be altered.

Video slot games that are based on popular comic books are interesting because they usually have a great set of bonus features installed.

The same rule applies with Justice League and the designers put in extra effort to make sure the features offered will be attractive to players. There are several smaller base play features triggered by the main super hero symbols and one main base play feature.

It is triggered when any of the superheroes covers the entire first reel and forms any winning combination in that spin. After that the stacked reel is cloned to the last one as well and additional re-spins are awarded.

The aim of this feature is to get as much identical symbols on the reels and many 5 of a kind wins. This is made possible by the wilds which land on the 3 central reels only. Whenever 3 Daily Planet symbols land on reels 2, 3 and 4, the player is awarded with 10 free spins.

The same feature applies here only that the wilds which land will fill up the meter to up to 5 superhero spins. This is aided by the random spacecraft which can land and award extra random wilds in every spin.

The super hero free spins is where the fun really starts. Each spin is played with identical super hero symbols stacked on reels 1 and 5, allowing for the re-spins to be triggered immediately. Also during the super hero mode free spins the spacecraft will now award extra free spins and extra win multipliers.

The highest possible multiplier that can be won during this feature is a great x 10. This combined with a full screen of identical symbols is a sure mega big win on the reels of Justice League.

Once you see what the free spins bonus round is really about you will undoubtedly recognize the winning potential Justice League has.

With a high x10 multiplier you have a chance to win over 2,500 x total bet in a single spin, while overall the free spins bonus can payout much more.

DC Comics go shoulder to shoulder with Marvel in the comic books world and that tradition continues in the online gambling world.

NextGen managed to create a great video slot game, following a popular and attractive theme, but juiced up with amazing bonus rounds.

The free spins will attract the attention of every slots player online, as the payout potential Justice League has is simply too much to pass on.