Justice League is a comic book themed slot machine, though this time we’re looking at the movie version, which just came out in 2017. The developer that got the rights to it is called Playtech, and they have managed to do a pretty good job designing this slot machine. The action revolves around the members of Justice League, including here Wonder Woman, Batman, Superman, The Flash, Cyborg and Aquaman.

You see these characters among the game’s symbols, with photos of the actors that played them being used in the symbols. Other symbols that appear on the reels will sport images of various logos that we associate with these heroes, like the Superman logo or the outline of the Bat. I found this to be a fairly enjoyable slot machine, especially for someone that already loves the story.

Playtech was founded back in 1999, and since then it’s been a developer of slot machines and other types of casino titles. More than 150 operators are using its software and games, and right now they are among the largest gaming providers in the world, at least among the ones that are publicly traded.

In addition to those slot machines, you can also find in their collection bingo, poker, sports betting and scratch games. 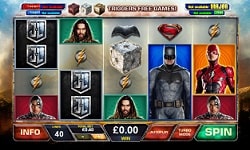 The bets that are placed on the 40 active lines of Justice League require a minimum of $0.01 each one, with the possibility of going as high as $50 per line. Given those numbers, the total bet can only be worth somewhere between $0.40 and $2,000, which is a big enough range to satisfy most budgets and gameplay styles.

This is going to be a slot machine which has 40 active lines on 5 reels. The reels feature 4 symbols each. All the options that you could use are placed on the bottom row, beneath the reels.

The game has a feature that appears at random, called Super Hero Respin. When this feature is triggered, the player will receive a respin, during which one of the Super Hero characters is turned into a wild. The feature may retrigger, up to 5 times, with new characters turned into wilds during each new respin.

It’s worth noting that the game offers the Super Hero symbols in stacked form as well, so they can end up covering a full reel when this happens.

There are 6 different types of free spins inside, and you unlock the next ones in time, as you continue to play and you trigger the feature more.

The later types will give you fewer free spins, but better features, so if you do win something, it will be big. These features revolve around Super Hero symbols that are turned into wild symbols. It’s more difficult at first, in the initial types of free spins, but the features get better and easier to trigger for the last ones.

There is a 10,000x jackpot that can be awarded in the game, and this could mean a cash prize of up to $500,000 for the player.
Since this is a slot machine that’s part of the DC Comics universe, you also have four progressive jackpots that could be triggered at any moment. Some of those are obviously going to be a lot better than others.

Justice League gives the player the experience of the movie that came out in 2017, as a branded title, and so it is a good choice for anyone that loves super heroes.