Jukepot is a retro themed slot, set in a classic American diner. The slot game is designed to look like a Jukebox. Coin operated music devices were most popular around the 1950s, and this seems to be the decade that this slot was pitching for.

There is a young couple that dances to your wins. The male counterpart of mentioned couple, wears a black leather jacket and greases his hair back. While the female, has a red polka dot dress, and fluffy blond hair. This is pretty 1950s stuff.

Jukepot was developed by a Nextgen Gaming, and Saber Interactive partnership. Nextgen Gaming are a veteran of the online slot world. They reported the release of their 600th game, at the end of 2012. Nextgen Gaming are a bit of a silent performer, while they release quality games, they don’t seem to make as much noise as other slot developers. Their previous titles, are well themed and aesthetical pleasing slots, with great gameplay. 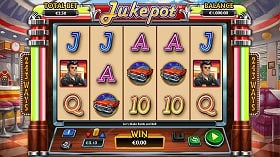 The reels spin inside a classic Jukebox. There is a lot of dark wood on the interface, especially on the beautifully designed panel.

The panel has 3D, jukebox style, buttons and it looks spectacular, while remaining simple. The reels are bordered by neon tubes that slowly change colour. The reels are a light brown colour. It is one of the better designs, and this slot is themed to perfection. The diner background is complete with red and white chequered floor and faux leather upholstery.

The player gets the reels spinning with the Spin Button, located on the right of the panel. Bets, are adjusted before the spin to take effect when the reels are spun. The value in the bet value box, is not the currency value of the bet but the coin value.

And players should be cautious that they are not betting more than they think. Only the coin value can be adjusted. There are 243 winning paylines in this slot, so winning combinations are formed when the same symbol lands on successive reels. The Record Symbol is wild, substituting for all symbol, with the exception of the scatter. The wild can appear as a stacked Wild Symbol, stacking in rows of three.

Jukepot has a free spins game, called Twist and Shout Locked Reels Free Game. This game is triggered when the player lands three of the Jukepot Symbol (scatter), anywhere on the reels.

The player is rewarded 10 free spins, paid at the bet that activated the game mode. In this game mode, a minimum of two adjacent reels will lock together, showing the same symbol, for the spin. This feature can expand to include up to all five reels. The couple that star in this slot, dance in the locked reels as they spin.

During the Base Game a Hot Rod may race across the reels, leaving a stack of wilds in its wake. Wilds are stacked in threes in Jukepot. This is a randomly triggered base game feature.

The Wild Symbol has the highest value, rewarding 500 credits for a five in a row win. Jukepot has stacked Wilds on all reels and this is how the player will win maximum payout in this game. Landing stacked Wilds on adjacent reels equates to massive winnings.

This game is exceptionally themed, and really pretty to play and look at. It has a lot of features and some great winning potential. Jukepot is one of the best games Nextgen Gaming, and Saber have released. It is a great slot with a lot of paylines.