While I enjoyed the end result, meaning that the graphics of Hyper Star are pretty good, I didn’t really find a proper theme inside. There is no story, just the usual mix of symbols that we’re used to seeing in classic slot machines. They’ve designed them to look better than in 99% of the classic slots we’ve seen so far though, and that’s already something that works in its favor.

What you’re going to see on the reels of this slot, is a mix of symbols that are mostly crafted out of gemstones. It starts with the four card suit icons, then continues with the cherries, dice, casino chips, golden bell, dollar sign, and Seven. Other symbols would include a Free Spins scatter and a Star Wild.

We’ve seen quite a few excellent slot machines from Gameburger Studios already, and as usual this one is also a Microgaming joint release. Some of the other great titles that the two have launched together, include Hyper Strike, Hyper Gold: Link & Win, along with 9 Pots of Gold. Many others are included on that list. 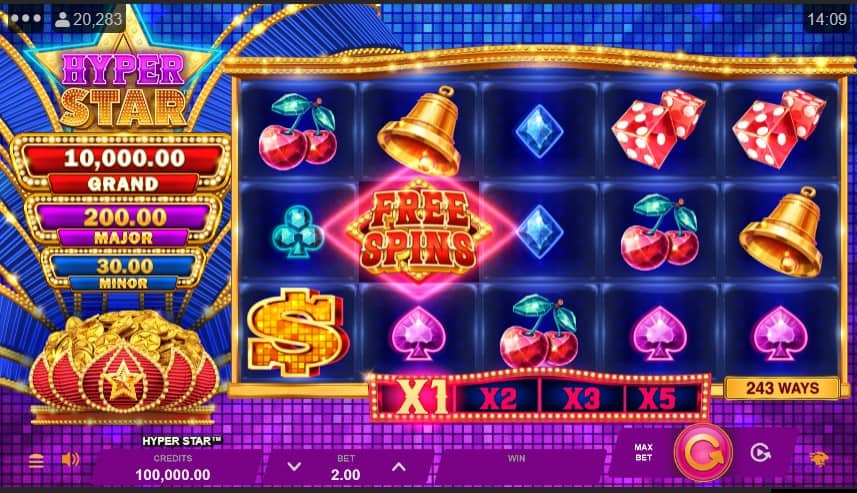 $0.20 to $40, that is the complete range of your bets in Hyper Star. The slot machine’s going to offer you all its ways to win regardless, but the value of its prizes will be higher if you spend more.

Hyper Star has 5×3 reels for us to spin, along with 243 ways to win. It’s easy enough forming a combination, since the symbols don’t need to land in fixed locations, but you still need 3 or more that match, to land left to right on consecutive reels.

Once a winning combination is formed, the Rolling Reels trigger. They remove any symbols involved in the win, and bring a new set in. If a new combo forms then, a new trigger of the Rolling Reels occur. This can go on forever, if you keep getting new combos.

An added benefit of the Rolls, is that there is a multiplier that goes up after each one. You can get to 2x, 3x, and then to 5x, for all wins, depending on how many rolls you get. It’s even better for the free spins (3x to 15x).

With only 3 reels (2, 3, and 4) to land on, the Star Wild will be useful at times, but nowhere near as powerful as in many other slot machines that use this feature. It’s a substitute, or a Joker if you will, so you can combine it with regular symbols and will form new combinations. Having ways to win in place makes this easier.

The game collects the Star Wilds that you get, across all Rolling Reels that are part of the same spin. It’s a random event, but the odds are better with a higher number of wilds. I’m talking about a chance at the Jackpot Wheel, which you can spin to win one of the three fixed jackpots (Grand is worth 5,000x the stake, and is the highest one offered).

You can also win 8 free spins, with tripled multipliers (starts at 3x and can go up to 15x through Rolling Reels). You just need 3 scatters with the Free Spins logo to land (wilds can replace scatters in this case, and will help trigger the feature).

Using the slot’s big multipliers, and the many ways to win available, you could claim a jackpot of 7,250x the stake. It’s pretty good for a highly volatile slot, as long as you find a casino that uses the highest RTP setting (96.05%).

Hyper Star relies on a number of popular features that are found in other Microgaming slots as well, and it’s a good choice for anyone that loves this type of highly volatile game. It pays well, and its design is good enough to even forget that it’s a classic theme.