Christmas is one of the busiest times of the year for online slot machine games. Most developers try and release their latest Christmas themed slots at the beginning of December, to lure those players who wish to play such games.

How well that will work out for them remains to be seen. Holiday Season is after all, not too different from other seasonal slots.

Play ‘n Go usually likes simplicity with their games and decent graphics. They have opted to go for a little bit of simplicity with the imagery in this game, whilst maintaining the remarkably basic features their slots normally contain.

The imagery is modern but primitive, and few players are going to be jumping up in delight when they see the wagering range which is in store for them.

Like most Play ‘n Go developed games, the simplest way to describe this slot is elementary to the core. If you like special features and plenty of them, you’re going to be out of luck with this slot. 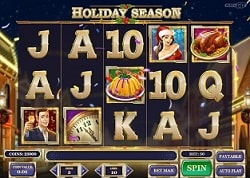 The buttons you need to place your bets are all located below the reels. Play ‘n Go hasn’t gone out of their way to make them flashy, or to even make them fit in with the overall Christmas-themed of the slot. The buttons and menus are plain and dull.

Players can use the menus to alter any of the game’s ten lines (why you would want to is beyond us), and at the same time select coin values which range from $0.01 up to $2.00.

You can bet as many as 5 of those coins per line, which gives the Holiday Season slot a floor bet of just $0.01 per line per spin, and a ceiling bet of $100 per spin.

Wild symbols: Wild symbols aren’t difficult to spot in this slot. They are represented by red presents. These wilds are also the best-paying icons in the game and can see you win up to 1,000 coins in all if 5 appear on a payline. Wilds can also substitute for all other symbols, save for scatters.

Scatter symbols: The scatter icons in this slot appear as champagne bottles. These are the symbols you require to trigger the slot’s singular bonus round. If you’ve played any slot before, though, you’ll already be well-versed in that.

Win Spins bonus: The free spins feature in this slot is known as a Win Spins bonus. Why? Namely because players are guaranteed a win on every single spin in the slot.

You’ll get 5 in total, although you can bag more by landing additional scatters on the reels. Players can retrigger the bonus round a total of 3 times in all. This is the only feature in this slot, which is rather disappointing, to say the least.

Play ‘n Go insist that as much as 500,000 coins can be won on this slot. We’re not quite sure how that is possible. When playing the game, we didn’t get anywhere near that figure.

Still, they’ve advertised it pretty boldly on the pay-table so it must be possible. The developers hint at the scatter being the key symbol for bagging wins, although again, we can’t really verify that.

Holiday Season is a hit and miss slot. For the time being (since there is no competition in the form of new Christmas themed slots out there), there is a good chance that this slot will pick up a few players.

However, once some of the rival developers start churning out their own slots, Holiday Season is likely to suffer.

It’s not an unlikeable slot, but there just aren’t enough features, the wins are too petite, and the amount of paylines you get is woeful considering what most other slots are capable of offering.

Holiday Season is fine to play for the moment, but you’re going to want to jump to bigger and better things as new slots become available; and trust us, they will be available shortly.