As Ancient Rome has borrowed a lot of their deities and mythology from the stories and culture of Greece, it’s likely that the god Vulcan will feel familiar to you. It’s the god of metalworking and fire, similar in that regard with the Greek Hephaestus. Quickspin is taking us into his forge, which we can see in the background, while the reels will provide us with a mix of Roman related graphics.

When it comes to its lower symbols, it starts with an X, which is the Roman version of the number 10. It continues with the other four top Royals, from J to A. You then see images of Tongs, Shield, Soldier’s Helmet, Crossed Swords, a Chalice, and a Gold Golem. Lastly, there are icons with the Volcano scatter, the W wild, and the Hammer Wild (showing Vulcan and his hammer).

Present at online casinos from 35 countries, Quickspin is a developer that’s popular, and yet it has only about 70 slot machines out right now. The explanation is simple, they only release about one new game each month, which allows them to focus on the quality of each slot.

I like most of their new games, and the quality shows in most of their work. A couple of recent examples, which are very good, include Crystal Prince and Titan Thunder: Wrath of Hades. 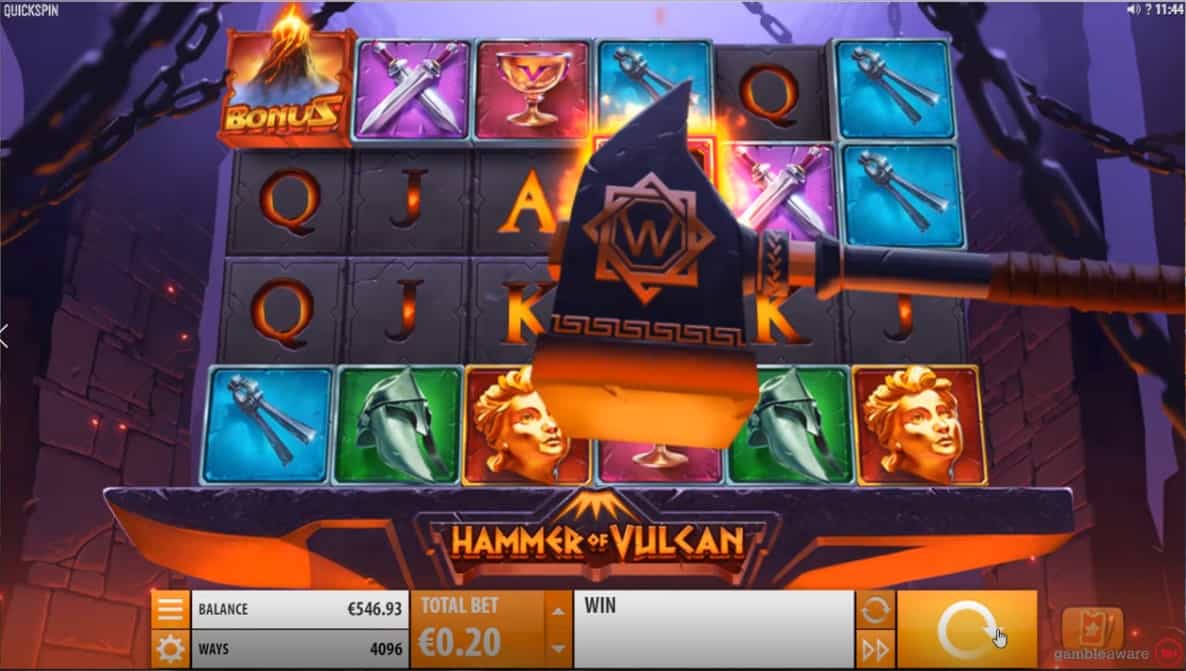 Most of their games appear to be similar, when it comes to this particular aspect. The betting range is always selected from a Total Bet section, which will list values from $0.10 to $100. That’s the total bet, to be used for all lines/ways to win available.

The game delivers 4096 ways to win, and it uses 6×4 reels to get you that number. Get 3 to 6 symbols to appear on just as many reels, starting from the leftmost column, and you will get paid.

Two types of wilds are included with Hammer of Vulcan. One is the regular wild symbol, which can be used to replace regular symbols, or to form top paying combinations (12x the stake per full combo).

The Hammer Wild shows us Vulcan, and its appearance will result in a Hammer Strike feature. Vulcan will smash the symbols which are underneath it, and will transform them into regular wilds.

Mount Etna, a famous volcano from Italy, is the home of Vulcan and also the image used for the Bonus symbol. As a scatter, the symbol will need to appear 3-6 times, in order for a bonus game to trigger. Light the Forge is its name, and it will include 10 to 20 free games.

While you’re going through those free spins, you will find that there will be a 1x boost to the multiplier, whenever a new Hammer Wild shows up and goes through the Hammer Strike feature.

Getting additional free spins is possible, but not as many as you triggered initially. 1 to 4 new scatters gets you 1 to 6 more free games. You can also get an extra round if the last free spin is not a paying one. You’re guaranteed to get paid in the last free spin.

Considered a risky game, due to its high volatility, Hammer of Vulcan is going to make up for that shortcoming by allowing for wins of up to 20,347x the stake to be paid out in a single spin. RTP is OK at 95.81%, but a lot of other games do better there.

Hammer of Vulcan is well designed, has a couple of decent features that one can explore, and the jackpot is impressive as well. Recommended to veteran players, which appreciate this sort of high risk/high reward ratio in games.

Hall of the Mountain King