Ancient Egypt, and its impressive building projects, has often been chosen to inspire slot machines and provide a nice backdrop for the action that’s happening on their reels. We’re seeing the same thing from Golden Glyph 2, a Quickspin slot machine that offers a large game area, with 7×7 symbols, filled with theme appropriate icons. Beyond the game area, we discover the desert and some constructions left behind by the Ancient Egyptians.

Golden Glyph 2 offers a lot of related images on the reels, using icons with Pharaohs, Cleopatra, Horus, the Ankh, but also various hieroglyphs inspired by the elements. The quality is not bad, but we’ve seen so many games with a similar theme, that it’s not easy getting excited about the design.

Quickspin is one of the big names of the casino industry right now, a developer that constantly releases excellent slots, and which is not afraid of innovation. Their collection is not as large as what we find at some of the others, but it’s going to be enough to keep you busy for a very long time. 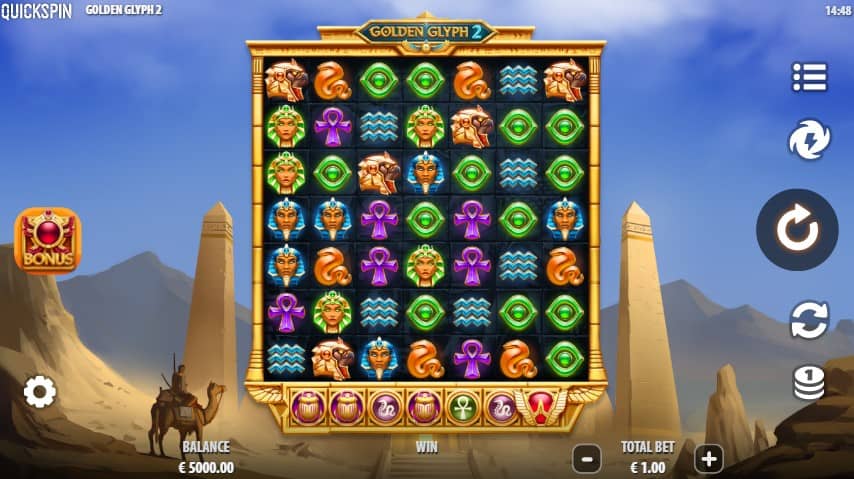 You don’t get to play around with the lines or individual bets, but you can just select the total amount as you’re going into the next round. It’s going to be a range between $0.20 and $100.

In exchange for whatever bet you’ve decided on, the game will give you the same area with 7×7 reels, and with a Cluster Pays system. What this means, is that you need a group of 5 to 15+ symbols clustered together (touching horizontally/vertically, but not diagonally).

The first thing that you will notice, when you form a cluster, is that this event will be followed by a tumble mechanic. The cluster’s symbols are removed, and the new ones taking their place can get you paid as well, if they end up forming new clusters. These tumbles can continue, if the requirements are met once again.

One more thing that you’re going to notice, is that a Power Glyph will show up in one of the positions left empty by the tumble mechanic. Have it contribute to a cluster after that, and the slot will activate a modifier. The list of available modifiers is shown at the bottom of the screen, in a special area with 7 positions. You start with the leftmost one, and you use them all up if you can, until you get to the 2×3 Mega Wild, which is always last.

The modifiers which are available include:

You can even trigger 7 free spins in this slot, and then you can retrigger them as well. This mode plays with a permanent Power Glyph Wild in view, but it moves around each spin. It makes it easier to activate the modifiers, plus it also has an increasing multiplier attached, which goes up whenever the wild is part of a cluster. It is capped at 50x, but that’s more than enough to make it a very powerful feature.

With a 29,500x jackpot as the ultimate target, I think that you can be very satisfied with the offer made in Golden Glyph 2. It’s a slot that has medium-high volatility, but the RTP is also good, at 96.09%.

Overall, I think that Golden Glyph 2 is a good second game in the series, and an excellent Cluster Pays slot for you to check out. It has plenty of good features, and it can be quite profitable, at least for a few of its players.

Pirate From The East