Though you’re getting a bit of a fairy tale style theme here, you don’t see it mirrored in the symbols that are used. The background does reveal majestic white castles in the clouds, but the reels get covered only by candy-shaped gemstones. Colored in light or dark blue, looking like hearts, moons, or stars, there are a lot of them that occupy those 7×7 reels. It’s fairly standard for Cluster Pays titles to offer this kind of design, so there is nothing special there.

The Gemix series, along with hundreds of other excellent slot machines, come from Play n GO. It’s a Swedish developer, with a lot of experience under its belt, easily found at most online casinos that rely on more than just one developer for their content. They have a bit of a conveyor belt approach to new game releases, but they manage to do them justice even so, so they always have enough cool features and big rewards for their players. 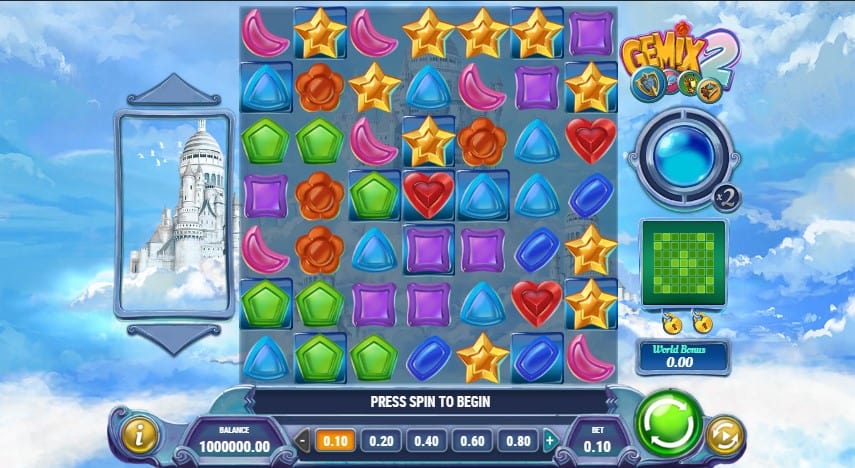 You start off by selecting a wager, and that’s pretty much all you need to do. The range that you’re using is between $0.20 and $100.

As for the kind of gameplay that’s available, you’re looking at 7×7 reels and Cluster Pays. It’s enough if you get 5+ matching symbols together, touching horizontally or vertically, they will pay you then.

Avalanches are integrated into the game’s design. As you create clusters of winning symbols, and you get paid, a meter is slowly filled up, until you have 25 of them. The Avalanche removes the symbols, and brings others in, so winning may continue. The meter needs to be filled within the same spin, but it can be over a number of avalanches. Filling up the meter (Crystal Charge) will activate a modifier, from the following options:

You can fill the meter further than 25 though, and if you get 50 charges in it, there will be a Super Charge  trigger. Here, you get all four types of modifiers active at the same time, and the multiplier is at 2x for all wins.

Get that Super Charge again in the same round, and the multiplier is increased by 2x. This can happen several times, with up to 20x multipliers available eventually.

World Patterns should also be mentioned. These are sets of predetermined symbol positions from the reels, that need to be cleared, by forming winning clusters on top of them. Clear a world, to get prizes from the G-Nome, including the World Bonus.

You also get four types of wilds, ranging from mega wilds with multipliers, to regular wilds, spreading wilds, or sticky wilds.

Gemix 2 can pay very well, and a 7,500x top jackpot is worth mentioning in any slot machine, but even more so when the game has medium volatility. The usual RTP range is employed, so while the value can be as high as 96.20%, it could also be at a lower level (make sure you check the help files and see what RTP you’re getting).

Gemix 2 is an improvement over the original, but it doesn’t look like a massive one. The payouts are better, but the RTP has dropped a bit, and the overall design hasn’t changed enough (only the background image). Still a good game, just not a big enough difference from the original.